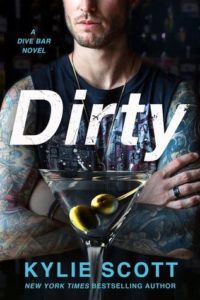 
Kylie Scott of Stage Dive series fame is back with the new Dive Bar series, kicking off with Dirty. I’m a huge fan of Scott’s Stage Dive books so was thrilled to see that there is a new spinoff series.

Dirty introduces some new players who work at the Dive Bar in Couer d’Alene, Idaho. Scott brings her signature brand of humor and romance (and rock n’ roll and tattoos) to this new setting, and since it’s set in the same universe as Stage Dive some familiar faces could pop up…

Our heroine Lydia’s wedding day does not go off as planned. She receives photographic evidence that her groom-to-be has been cheating on her. She flees in her wedding dress, hops the fence and climbs into the window next door. Hiding in the bathtub, she gives house owner (and naked) Vaughan a big surprise when he turns on the shower.

Vaughan is back in his childhood home to tie up loose ends after his band’s breakup. The band split after finishing their tour opening for Stage Dive. It’s hard being back in his childhood home now that his parents are gone, and he’s planning to sell the house. His sister Nell co-owns the Dive Bar in town, and Vaughan does a little bartending there. Lydia and Vaughan agree to a casual fling to help forget about their troubles.

Vaughan and Lydia hit it off instantly as friends with potential. Both of their lives are in limbo so there is no pressure on their relationship but at the same time it’s hard to deny their growing feelings. Lydia comes to love the Dive Bar and the family atmosphere, putting her plans in limbo. And Vaughan has some career choices to make of his own. Meanwhile, the ride is fun and flirty and even though there are some bumps in the road the journey never gets overly angsty.

Since this is the first book of a new series, we get brief introductions to several of the key players and get the lay of the land. The Dive Bar seems like a chill place to hang out, and the secondary characters seem like they will bring more heat and drama in the coming installments.

Fans of the Stage Dive series should head on over to the Dive Bar for more of Scott’s familiar brand of humor, romance, tattoos and body positive and sex positive adventures. I can’t wait for book two Twist (and hopefully more Stage Dive cameos) to hit later this year.

Blog Tour: How to Keep a Boy From Kissing You

One thought on “Dirty (Dive Bar #1) by Kylie Scott”