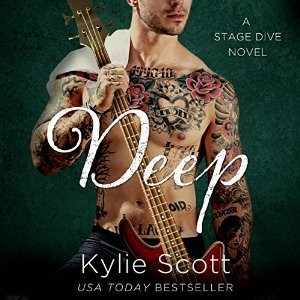 Don't miss a beat with the fourth and final novel in the New York Times and USA Today best-selling Stage Dive series from Kylie Scott.

One by one the members of Stage Dive are falling in love. David, Mal, and Jimmy have all taken the plunge, and now it's Ben's turn - only he refuses to fall into that trap. The sexy bassist enjoys his no-strings-attached lifestyle. But when Ben is forced to keep the one girl he's always had a weakness for out of trouble in Sin City, he quickly learns that what happens in Vegas doesn't always stay there.

Deep is the fourth and final book in Kylie Scott’s Stage Dive series. Each book features a member of the band Stage Dive as they find true love. Deep focuses on Ben the bass player- the strong and silent type and the one least likely to commit. The girl that steals his heart is forbidden fruit- she’s the sister-in-law of bandmate Mal, and he’s been warned to back off. But one night he gives in to his feelings for Lizzy and there’s no hiding the result from the bandmates- there’s a Stage Dive baby on the way.

This series has been a blast to read and I’ve enjoyed getting to know all the members of Stage Dive. Ben is the most mysterious member of the group so I looked forward to seeing the man behind the beard get some attention.

Remaining true to his character, Ben plays his cards close to the chest. Like Lizzy, the reader is also trying to figure the enigmatic bass player out. (And there’s no Ben POV to help us out) Lizzy falls for Ben hard and pursues him while he’s trying to keep her at arm’s length. But with a baby on the way that adds a lot more pressure to these two.

We get to know Lizzy in Play (she’s Anne’s younger sister) but since she didn’t make a big impression on me then I was surprised how much I enjoyed her voice in Deep. Lizzy is in college and wants to be a psychologist- a baby was definitely not her plan. However, she is surprisingly very levelheaded about this curveball and realistic about gun-shy Ben and the role he may play in the “bean’s” life. And I liked that Lizzy gets stronger and more vocal about what she wants, as she gets tired of waiting for Ben.

Ben and Lizzy have great chemistry, though the will-they-won’t-they gets teased for a good long while in this book. I think this makes the romance that more satisfying and hard-earned for these too though the push-pull is a little frustrating for the reader.

Considering I’m an audiobook fan, it’s surprising that this is the first Stage Dive book I’ve listened to. I heard that Andi Arndt does an amazing job with the narration so I had to give the audiobook a shot. I think Arndt nails the voice of Lizzy, making her sound youthful and strong yet vulnerable. Considering there is a large cast of characters in this series- the bandmates, their wives, and various entourage- Arndt keeps up with all the voices so I never lost track of who was speaking. I was impressed with both her male and female voices and her emotional range. I’m looking forward to giving the other three Stage Dive books a listen sometime. Check out a sample:

There are some great scenes featuring the other couples we know and love from the previous Stage Dive books. And considering they are on the road and there are these added stresses going on we get to see different sides of the band members. Mal, in particular, shows off his protective side, though all the bandmates give their opinion of the situation.

I flew through this book and will definitely miss this series. It felt like maybe the door was left open for a spinoff of sorts and hopefully Ms. Scott will explore that possibility in the future. If you have any rockstar romance recs in the meantime that will fill the Stage Dive void in my heart, do let me know in the comments!

Deep will probably work as a standalone book, but I recommend reading them in order: Lick | Play | Lead