I’m so thrilled to partner with Macmillan Audio on this awesome giveaway! I think audiobooks and Rainbow Rowell are a winning combination, and in fact listening is my preferred way to experience her books. Carry On is Rainbow Rowell’s latest and I’m planning to dive into it this weekend. (Have you read it yet?!) If you also love Rainbow Rowell and audiobooks then this giveaway is for you! Read on to find out more about the book Carry On and how to enter to win a signed copy of the audiobook. 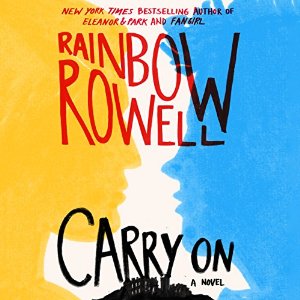 Simon Snow is the worst Chosen One who’s ever been chosen.

That’s what his roommate, Baz, says. And Baz might be evil and a vampire and a complete git, but he’s probably right.

Half the time Simon can’t even make his wand work, and the other half he starts something on fire. His mentor’s avoiding him, his girlfriend broke up with him, and there’s a magic-eating monster running around wearing Simon’s face. Baz would be having a field day with all this if he were here – it’s their last year at the Watford School of Magicks, and Simon’s infuriating nemesis didn’t even bother to show up.

Carry On is a ghost story, a love story, and a mystery. It has just as much kissing and talking as you’d expect from a Rainbow Rowell story – but far, far more monsters.

Carry On by Rainbow Rowell. Audiobook Read by Euan Morton

About the Author and Narrator:

When she’s not writing, Rainbow is reading comic books, planning Disney World trips and arguing about things that don’t really matter in the big scheme of things. She lives in Nebraska with her husband and two sons. You can learn more on her website: www.RainbowRowell.com

EUAN MORTON is a Scottish actor and singer. He is known for his role as Boy George in the musicalTaboo, receiving nominations for the Laurence Olivier Award and Tony Award for his performance.

One (1) winner receives a signed copy of the Carry On audiobook!

Giveaway open to US addresses only, ages 13 and up.

Fill out the Rafflecopter to enter!

The Bookshop on the Corner by Jenny Colgan – Spotlight and Giveaway
Blog Tour: All the Rage by Courtney Summers Author Q&A and Giveaway

Isla and the Happily Ever After by Stephanie Perkins Book Review
Blog Tour: Dream Things True by Marie Marquardt Review | Giveaway
Better Nate Than Ever by Tim Federle Audiobook Review

3 thoughts on “Audiobook Giveaway: CARRY ON by Rainbow Rowell (Signed!)”