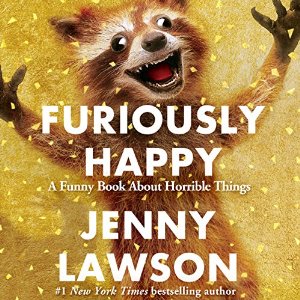 Also by this author: Let's Pretend This Never Happened

But terrible ideas are what Jenny does best.

Lawson is beloved around the world for her inimitable humor and honesty, and in Furiously Happy, she is at her snort-inducing funniest. This is a book about embracing everything that makes us who we are - the beautiful and the flawed - and then using it to find joy in fantastic and outrageous ways. Because as Jenny's mom says, "Maybe 'crazy' isn't so bad after all." Sometimes crazy is just right.

A few years ago I raved about Jenny Lawson’s humorous memoir debut Let’s Pretend This Never Happened, a book about Lawson’s eccentric upbringing in rural Texas and how she became the Bloggess we know her as today. Lawson’s dark and quirky sense of humor and laugh out loud stories resonated with readers and her book became a huge hit. In Lawson’s new book of personal essays, Furiously Happy, she switches gears a little to the topic of mental illness.

While Furiously Happy is still very funny, it’s also an honest portrayal of living with depression, anxiety, and an autoimmune disorder. The title “furiously happy” refers to celebrating your “up days” when you have them so that they sustain you through darker times. Lawson’s own furiously happy stories are personal and relatable and I’m grateful she’s sharing them with the world so that those of us dealing with our own personal demons can feel less alone.

The book trailer made me tear up a bit but remember the book is humorous too. See if you can spot some familiar faces:

Some of the more humorous stories in the book involve Lawson’s family life with her husband Victor and their animals, real and stuffed. Furiously Happy’s cover star Rory the raccoon features in the book as kind of a furiously happy mascot. Isn’t he awesome? (Lawson’s dad is a taxidermist and Lawson herself has quite the collection of taxidermied animals.)

Lawson talks about experience with self-harm, the loneliness and anxiety experienced on her book tours, and medication and therapy for her mental illness. She also notes how well meaning friends don’t always get it – comparing reactions to a cancer patient trying to get the right drugs to shrink the tumor to someone in treatment for mental illness trying to get the right drug that works for them.

I listened to the Furiously Happy audiobook, read by Jenny Lawson herself. She talks about the experience narrating the audiobook for Let’s Pretend This Never Happened and how it wasn’t going so well. She wrote a desperate text to author and narrator Neil Gaiman who gave her great advice: “Pretend you’re good at it.” She scrawled the advice on her arm and went back to the studio. And that did the trick! Really, I can’t imagine anyone else narrating this book so I’m glad that she powered through. Lawson narrates her story in an animated way like she’s talking to you and makes the story all the more personal. It’s a really funny, fast listen. Plus, there’s a bonus chapter audiobook exclusive. Check out an excerpt from Furiously Happy:

Furiously Happy should appeal to readers of Jenny Lawson and humorous memoirs, and should resonate with anyone whose life has been touched by mental illness. I look forward to many more books from Lawson.

Half a World Away by Cynthia Kadohata Audiobook Review
Blog Tour: The One That Got Away by Bethany Chase

Audiobook Review: We Should Hang Out Sometime by Josh Sundquist
Audiobook Giveaway: CARRY ON by Rainbow Rowell (Signed!)