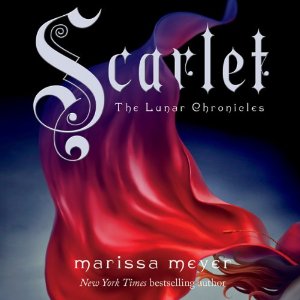 Also by this author: Cinder

Cinder, the cyborg mechanic, returns in the second thrilling installment of Marissa Meyer's bestselling Lunar Chronicles. She's trying to break out of prison--even though if she succeeds, she'll be the Commonwealth's most wanted fugitive.
Halfway around the world, Scarlet Benoit's grandmother is missing. It turns out there are many things Scarlet doesn't know about her grandmother or the grave danger she has lived in her whole life. When Scarlet encounters Wolf, a street fighter who may have information as to her grandmother's whereabouts, she is loath to trust this stranger, but is inexplicably drawn to him, and he to her. As Scarlet and Wolf unravel one mystery, they encounter another when they meet Cinder. Now, all of them must stay one step ahead of the vicious Lunar Queen Levana, who will do anything for the handsome Prince Kai to become her husband, her king, her prisoner.
An NPR Best Book of 2013

I read Cinder over two years ago, so I’m a little behind at reading this sequel. I kind of like waiting until I have a stockpile of sequel books to read so the cliffhangers don’t get to me too bad. And now I get to read Scarlet and Cress back to back! Fairytale retellings are not usually my thing but maybe the SciFi element of this series makes it more appealing to me.  Strong characters, fast paced action, romance, and a creative setting make this a standout series.

I was worried that this installment features a whole new cast, since I liked Cinder so much in the first book. But, there is still a lot of Cinder in this book, and the new characters fit right in. Scarlet features a cool twist on the Little Red Riding Hood story, with a tortured love interest in Wolf, and the mystery of the missing grandmother.

Though it’s been a while since I read the first book, it was easy to catch up. The book picks up where Cinder left off, with Cinder locked up. She meets a cocky spaceship “captain” Han Solo-type named Thorne in jail and they become partners in crime.

Scarlet is a fearless new character. She is self-reliant and kick-ass and just wants to save her beloved grandmother. She doesn’t know if she can trust Wolf, and the reader is understandably wary of him too, considering the source material. But at the same time this bad boy romance works, even though this bad boy is a member of a wolf pack.

The action alternates between Cinder’s and Scarlet’s stories, so we learn a lot more about the political developments and backstories through each character’s eyes. Other fan favorite characters from Cinder also feature in the book, including Prince Kai and Cinder’s android pal Iko.

I loved Rebecca Soler’s performance in the Cinder audiobook, so I’m sticking with that format for the series. Soler gets to play more with accents in this installment since Scarlet’s story is set in France. Her accents are subtle yet effective and help make the character’s voices distinct. Soler’s Scarlet voice lines up with the character’s headstrong and impulsive personality. Soler continues to do a solid job with her performance, and makes the story more intense and exciting. I have the Cress audiobook in hand happily and can’t wait to dive in.

Overall this series is a lot of fun. We are halfway through the four-book series and I can’t wait to see where it’s all going. I liked Scarlet a little less than Cinder, maybe because I missed the Kai/Cinder dynamic in this book, and there are so many balls in the air. We learn more pieces of the puzzle in this book, but I still feel a little in the dark. The new characters bring a freshness to the series though, and I look forward to seeing how the relationships develop.  If you’ve been putting off reading the Lunar Chronicles, it’s a good time to catch up on this inventive series! Cress is out now, and the final book Winter is due out in 2015.

Listen to the first chapter of Scarlet, performed by Rebecca Soler: