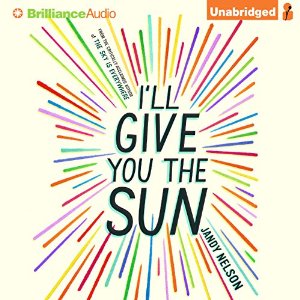 Jude and her brother, Noah, are incredibly close twins. At thirteen, isolated Noah draws constantly and is falling in love with the charismatic boy next door, while daredevil Jude surfs and cliff-dives and wears red-red lipstick and does the talking for both of them. But three years later, Jude and Noah are barely speaking. Something has happened to wreck the twins in different and divisive ways…until Jude meets a cocky, broken, beautiful boy, as well as an unpredictable new mentor. The early years are Noah's story to tell. The later years are Jude's. What the twins don't realize is that they each have only half the story, and if they could just find their way back to one another, they’d have a chance to remake their world.

This radiant, fully alive novel from the critically acclaimed author of The Sky Is Everywhere will leave you breathless and teary and laughing - often all at once.

I’m closing out the year by catching up on some “best of the year” books that I missed when they first came out. One of the most acclaimed YA books of the year is Jandy Nelsons‘ second novel I’ll Give You the Sun. I am a big fan of Nelsons’ first book The Sky is Everywhere and eagerly anticipated this one, though since there was so much hype upon its release I waited a little bit to read it.

This creative book is about a set of once-close twins who have a falling out. A big life event (spoiler I guess since it’s not in the synopsis) is the thing that drives a wedge between them, and now their life paths have veered off course. It seems like the only way for them to heal is to resolve the past. Through the unique then/now, he said/she said narrative we piece together what happened.

Noah and Jude’s story starts with 13-year-old Noah. He falls for new boy in town Brian. Jude’s story picks up a few years later when the twins are 16. Jude attends art school (the one Noah really wanted to attend) and she’s having a hard time. It seems that ghosts are ruining all of her art projects! Are her loved ones trying to send her a message? Jude gets some help from a sculptor, and his sidekick, the dreamy British guy. (Too bad Jude is on a boy boycott at the moment) Jude and Noah need each other to exorcise these demons, though it will take some time for them to get there.

There are a lot of weird things going on in this book and it’s a lot to take in, especially at the beginning. The payoff is really good mind you; it just got off to a slow start for me. Noah’s voice took some getting used to- his chapters take place when he is in his early teens and his unique choice of words/slang put me off a bit. I was much more enamored with Jude’s story set in the present day.

That being said, Jandy Nelson put something really powerful together – both parts of the story combine into a very satisfying reveal. By the end, I was just as invested in Noah’s/Brian’s story as I was in Jude’s.

I listened to the audiobook, narrated by Julia Whelan and Jesse Bernstein. Both did a fine job, though the intricate nature of the storytelling makes me wonder if I wouldn’t have liked this book even more in print. My mind wandered a bit when I was listening at the beginning and I sped up the pace of the audiobook. Bernstein has a quirky young-sounding tone for his voice that works for Noah, and Whelan’s voice is appropriately more mature and subdued for Jude. Take a listen:

There is a lot to love about this book: Art, sibling relationships, parental relationships, romantic love, identity, beautiful writing, and a book cover you’d want to put on your wall. If you are a fan of contemporary YA you’ve probably already read this one, but if you haven’t keep it in mind. There’s going to be a movie!

Just Between Us by J.H. Trumble Book Review
Since Last Summer by Joanna Philbin spotlight and Beach Bag Giveaway

9 thoughts on “Audiobook Review: I’ll Give You the Sun by Jandy Nelson”