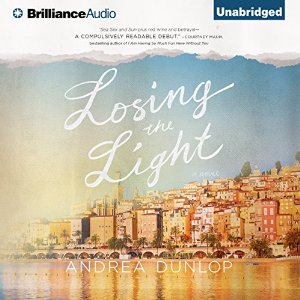 Andrea Dunlop’s debut Losing the Light follows two California college students studying abroad in France. They fall in love with the French culture and all their new freedom, but they also fall for the same guy. It’s a story of obsession, mystery and destructive friendships. This atmospheric book had me completely transfixed. If you’re not planning a trip to France anytime soon this book is the next best thing!

When our heroine Brooke was a college freshman, she had an affair with her professor, and the school suggested this study abroad program to get some distance. She goes to France with Sophie, a casual acquaintance who quickly becomes the center of her universe. As the book begins, Brooke is now 30 and living in New York City. She reflects on the past when she unexpectedly runs into someone from that transformative time.

When Brooke and Sophie arrive in France they spend a lot of their free time with Veronique, a local girl who takes them under her wing. Veronique’s cousin, elusive photographer Alex, charms both girls and causes friction between them. Sophie seems nonchalant about Alex while Brooke obsesses over his every move. Can their friendship survive?

Cassandra Campbell narrates the audiobook and does a magnifique job with the narration and conveying Brooke’s state of mind. Campbell also uses with a French accent for many of the scenes in France and that helps those scenes come alive. Her voice for Alex fit the character quite well I think, and it was easy to differentiate between the characters. Take this audiobook on your summer adventures and you’ll be hooked until sundown.

Losing the Light is a good crossover book for readers that like coming-of-age novels, the French setting and emotional reads. The sights, sounds and energy of France shine through the book. And the edgy and mysterious nature of the story made for a nice contrast. The haunting ending caught me off guard and made me eager to read more from Andrea Dunlop.

One thought on “Audiobook Review: Losing the Light by Andrea Dunlop”