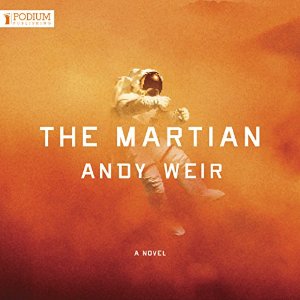 Six days ago, astronaut Mark Watney became one of the first people to walk on Mars.
Now, he's sure he'll be the first person to die there.
After a dust storm nearly kills him and forces his crew to evacuate while thinking him dead, Mark finds himself stranded and completely alone with no way to even signal Earth that he’s alive—and even if he could get word out, his supplies would be gone long before a rescue could arrive.
Chances are, though, he won't have time to starve to death. The damaged machinery, unforgiving environment, or plain-old "human error" are much more likely to kill him first.
But Mark isn't ready to give up yet. Drawing on his ingenuity, his engineering skills—and a relentless, dogged refusal to quit—he steadfastly confronts one seemingly insurmountable obstacle after the next. Will his resourcefulness be enough to overcome the impossible odds against him?

I am very late to The Martian party, but I finally listened to this Audie-winning audiobook. This is a thrilling read made even better by the stellar audiobook narration and I’m glad I read it before seeing the movie.

At Comic-Con this summer I saw author Andy Weir on a “Book to Screen” panel and the enthusiasm in the room for The Martian was palpable. They even ran out of books for the signing afterward. I still put off reading this because I am not a big sci-fi reader, but the hype and the movie trailer got to me in the end, and I zipped through this audiobook.

The Martian is about astronaut Mark Watney, who was on a mission to Mars when things went wrong. His crew didn’t think he’d survived a dust storm and so he was left for dead. Watney has to try to survive on Mars on his own until the next team arrives.

This is a very science-y sci-fi story, but the author makes it accessible and interesting. Though Watney’s geeky brilliance went over my head at times! Watney details his experiences in journal form – kind of a how-to-survive on Mars diary. Watney is a funny guy who stays upbeat even in the most challenging situations- with 70s TV shows to keep him entertained and the disco left behind by his crewmate to complain about.

Just when I was feeling really claustrophobic with Watney on Mars I was glad to see the story open up to include the team back home at NASA as well as his crewmates. The supporting characters add more context and interest to the story.

I listened to the audiobook, performed by R.C. Bray. I don’t know if I would have loved this book as much if it weren’t for the audiobook. The story is excellent, but Bray’s engaging performance makes the science easier to digest. He plays up the humor of the story while keeping the tension ramped up. The journal format of Watney’s experiences translates perfectly to audio format. I encourage you to listen to this one if you can, though you probably already have!

Check out an audiobook sample:

Regarding the movie, I purposely did not look up the cast info on IMDB while I was listening to this book. Of course I know Matt Damon stars but I wanted to get a picture of the rest of the cast in my head before seeing the film. Now that I’ve seen the cast I’m very pleased. Hope the film does the book justice! Here’s the trailer:

Have you read The Martian and are  you totally excited to see the film?

5 thoughts on “Audiobook Review: The Martian by Andy Weir”