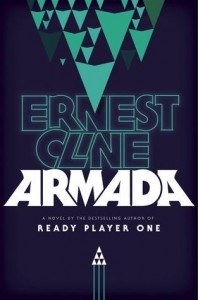 Also by this author: Ready Player One

Zack Lightman has spent his life dreaming. Dreaming that the real world could be a little more like the countless science-fiction books, movies, and videogames he’s spent his life consuming. Dreaming that one day, some fantastic, world-altering event will shatter the monotony of his humdrum existence and whisk him off on some grand space-faring adventure.  But hey, there’s nothing wrong with a little escapism, right? After all, Zack tells himself, he knows the difference between fantasy and reality. He knows that here in the real world, aimless teenage gamers with anger issues don’t get chosen to save the universe.  And then he sees the flying saucer.  Even stranger, the alien ship he’s staring at is straight out of the videogame he plays every night, a hugely popular online flight simulator called Armada—in which gamers just happen to be protecting the earth from alien invaders.   No, Zack hasn’t lost his mind. As impossible as it seems, what he’s seeing is all too real. And his skills—as well as those of millions of gamers across the world—are going to be needed to save the earth from what’s about to befall it.  It’s Zack’s chance, at last, to play the hero. But even through the terror and exhilaration, he can’t help thinking back to all those science-fiction stories he grew up with, and wondering: Doesn’t something about this scenario seem a little…familiar?

From where I sit, the only flaw with Ernest Cline’s engaging second novel Armada is that it has really big shoes to fill. Cline’s sprawling, ingenious, and hilarious 2011 debut Ready Player One earned praise, awards, and an upcoming film adaptation directed by Steven Spielberg. Is Armada as rich, giddy, and clever as Ready Player One? Well, not quite. Is it still a worthwhile read? Oh, absolutely.

If anything, Armada’s even more of a page-turner than its predecessor. The very first sentence finds our hero Zack Lightman daydreaming in math class and spotting a low-flying spaceship outside the window. Even weirder, the craft is a dead ringer for the alien spaceships in Zack’s favorite space-battle video game, Armada.

Suddenly the boy is filled with curiosity about the eccentric journals left behind by his late father, a teenage gamer who died in Zack’s infancy. Racing home, he finally starts to understand the curious timeline sketched out by his father, outlining the torrent of science fiction games and movies over the past four decades obsessed with intergalactic conflict. But is his father really suggesting that these works were funded and supported by a conspiracy wishing to create a future generation of star warriors? And if so, why?

The questions are answered soon enough and the novel’s brisk pace jumps to light speed. Without giving anything away, I can tell you that Zack meets other top scorers from Armada’s global tote board, among them a pretty and talented punk hacker, a kickass mom, and one legendary player Zack was sure he’d never meet in person.

The furious pace of the narrative hits a brief lull halfway through as it seems all secrets are revealed. But then a maddening possibility emerges: what if the central conflict is something very different than we thought it was? By changing the rules of this game, this twist pulls us inexorably through the book’s second half like a tractor beam.

With knowing winks towards countless space-battle movies, books, and games (some identified and some not), this is a real feast for the sci-fi enthusiast. But its story is human enough to be accessible to all readers, and to me felt YA-friendly. I’m hoping that this has been optioned for a film as well; the relatively simple narrative will translate beautifully to the screen, perhaps more easily than Ready Player One, even.

One thought on “Book Review: Armada by Ernest Cline”