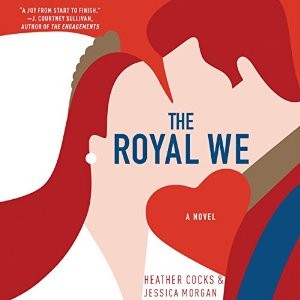 "I might be Cinderella today, but I dread who they'll think I am tomorrow. I guess it depends on what I do next." American Rebecca Porter was never one for fairy tales. Her twin sister, Lacey, has always been the romantic who fantasized about glamour and royalty, fame and fortune. Yet it's Bex who seeks adventure at Oxford and finds herself living down the hall from Prince Nicholas, Great Britain's future king. And when Bex can't resist falling for Nick, the person behind the prince, it propels her into a world she did not expect to inhabit, under a spotlight she is not prepared to face. Dating Nick immerses Bex in ritzy society, dazzling ski trips, and dinners at Kensington Palace with him and his charming, troublesome brother, Freddie. But the relationship also comes with unimaginable baggage: hysterical tabloids, Nick's sparkling and far more suitable ex-girlfriends, and a royal family whose private life is much thornier and more tragic than anyone on the outside knows. The pressures are almost too much to bear as Bex struggles to reconcile the man she loves with the monarch he's fated to become. Which is how she gets into trouble. Now, on the eve of the wedding of the century, Bex is faced with whether everything she's sacrificed for love - her career, her home, her family, maybe even herself - will have been for nothing.

I never fancied myself much of a Royal watcher, but I ate up The Royal We’s reimagining of the Kate Middleton and Prince William courtship with a spoon. Nick and Bex’s royal romance is dishy and escapist fun, with juicy scandals and betrayals that keep you on your toes.

Rebecca (Bex) Porter leaves her twin sister behind in America to attend the University of Oxford. Prince Nicholas greets her at the door and soon they are bonding over trashy American TV and Twinkies. Though they are both seeing other people, their chemistry is undeniable and soon they give in to their attraction. But can their relationship survive life in the spotlight?

Co-authors Heather Cocks and Jessica Morgan’s (The Fug Girls) fictional yarn is a nod to the real-life Cinderella story but takes some liberties as well. There is a Prince Harry stand-in in Freddie, and likewise Bex has a stylish, attention-grabbing sister in Lacey. But, some fresh details such as Bex’s American upbringing, and Nick’s emotionally absent, yet still breathing mother add intrigue. The Royal We is its own story though it’s hard not to compare it to the famous royal couple’s legend.

This book takes you through the ups and downs of Bex and Nick’s relationship over several years. The public scrutiny takes its toll on Bex, especially with Nick’s long absences serving in the military. Bex is left to figure out her role and if being with Nick is worth sacrificing her own dreams and the gossip and other negative attention.

This book is deliciously fun and Cocks and Morgan add comical details (Nick’s Karaoke in Batman mask, the humorous tabloid headlines, and Bex’s family business the fridge-furniture Coucherator) to keep the tone light. But there are some angsty moments as well, including rocky moments between the two sets of siblings. Through it all is a core group of friends and drinking buddies that try to keep each other sane.

I read the book in print first and was so enamored of it I picked up the audiobook for a “re-read.” Christine Lakin performs the almost 18-hour audiobook. I’m familiar with Lakin from YA audiobooks like Define Normal and Glory O’Brien’s History of the Future, though I hope she narrates more Adult fiction audiobooks like this one. Her vocal range makes her suited for both YA and adult. Lakin has an expressive voice and does well with the various accents and keeping track of the large cast of characters. This is a good audiobook for casual listeners- you’ll look forward to your commute! Take a listen to a sample:

This is the first Adult novel from Heather Cocks and Jessica Morgan and I’m eager to catch up on their YA offerings when I get the chance. The Royal We is on sale now.

Audiobook Review: Finding Jake by Bryan Reardon
In My Mailbox (48)

Pretending to Dance by Diane Chamberlain
Books on TV: Younger

6 thoughts on “Audiobook Review: The Royal We by Heather Cocks, Jessica Morgan”