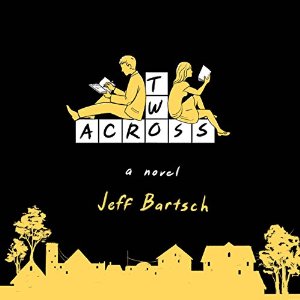 Highly awkward teenager Stanley Owens meets his match in beautiful, brainy Vera Baxter when they tie for first place in the annual national spelling bee - and the two form a bond that will change both of their lives.
Though their mothers have big plans for them - Stanley will become a senator, Vera a mathematics professor - neither wants to follow these predetermined paths. So Stanley hatches a scheme to marry Vera in a sham wedding for the cash gifts, hoping they will enable him to pursue his one true love: crossword puzzle construction. In enlisting Vera to marry him, though, he neglects one variable: she's secretly in love with him, which makes their counterfeit ceremony an exercise in misery for her.
Realizing the truth only after she's moved away and cut him out of her life, Stanley tries to atone for his mistakes and win her back. But he's unable to find her until one day he comes across a puzzle whose clues make him think it could only have been created by Vera. Intrigued, he plays along, communicating back to her via his own gridded clues. But will they connect again before it's all too late?

Two Across is a sort of romantic comedy about Stanley and Vera, two brilliant fifteen-year-olds who meet at the 1960 National Spelling Bee, where they tie for first place. How’s that for a meet cute? This is a fun and offbeat debut that made me appreciate the art (and romance) of the crossword puzzle!

Stanley would rather get a job constructing crossword puzzles than attend university and so he makes his old spelling bee pal Vera a proposition. If they get married, they can sell the gifts and split the money. Vera can go to college and Stanley can fund his crossword puzzle passion. But for someone so brilliant at spelling, trivia and puzzles, Stanley is clueless at the game of love and doesn’t recognize Vera’s very real feelings for him.

Two Across takes place over a large chunk of time during which Stanley and Vera’s have their own school, work, and romantic adventures. The 1960s setting means there are no cell phones or Internet to get in touch, but Stanley and Vera are always just a crossword puzzle away from each other. The two send each other coded messages through their themed crosswords when they want to communicate.

It takes some time for Stanley and Vera to find their footing and their journey takes them in some interesting directions. For a rom-com, this story is frustrating on the rom-front but I was consistently entertained. (That ending though!) I enjoyed the nods to 1960s pop culture too.

I listened to the Two Across audiobook, read by Andrew Eiden. You may think it’s funny to listen to a book that is so much about words and crossword puzzles. I did kind of wish I could see the crossword puzzles described in the book, but I do think the narrator did a good job verbally communicating the puzzles just the same. Eiden’s deadpan delivery matched the tone of the book very well. There were some edits that were distracting to me in the audiobook but overall I enjoyed listening to this one.

Take a listen from chapter one where Stanley and Vera compete at the National Spelling Bee:

I think that word nerds and crossword puzzle enthusiasts, and maybe even Mad Men fans will really enjoy this one. It’s not a YA book. but I definitely think it has crossover appeal. If you liked Rainbow Rowell’s adult novels Attachments and Landline you may enjoy Two Across too. I look forward to reading more from Jeff Bartsch.

Audiobook Review: Us by David Nicholls
#YADiversityBookClub: The Star-Touched Queen by Roshani Chokshi

3 thoughts on “Audiobook Review: Two Across by Jeff Bartsch”