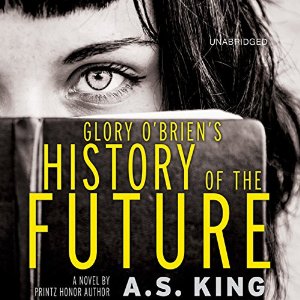 In this masterpiece about freedom, feminism, and destiny, Printz Honor author A.S. King tells the epic story of a girl coping with devastating loss at long last - a girl who has no idea that the future needs her, and that the present needs her even more.

Graduating from high school is a time of limitless possibilities - but not for Glory, who has no plan for what's next. Her mother committed suicide when Glory was only four years old, and she's never stopped wondering if she will eventually go the same way...until a transformative night when she begins to experience an astonishing new power to see a person's infinite past and future. From ancient ancestors to many generations forward, Glory is bombarded with visions - and what she sees ahead of her is terrifying: A tyrannical new leader raises an army. Women's rights disappear. A violent second civil war breaks out. And young girls vanish daily, sold off or interned in camps. Glory makes it her mission to record everything she sees, hoping her notes will somehow make a difference. She may not see a future for herself, but she'll do anything to make sure this one doesn't come to pass.

With A.S. King’s books you know you’re going to get something off the beaten path, something with a little magical realism to it and something offbeat. Like her latest book Glory O’Brien’s History of the Future. When drinking beer one night, Glory and her friend Ella impulsively drink the remains of a petrified bat and suddenly can see the past and future in the eyes of everyone they meet. And the future ain’t pretty, folks. Glory sees a second civil war break out and with it comes violence, despair, and the disappearance of women’s rights.

This coming-of-age story features Glory, a graduating senior who doesn’t know what she wants to do with her life. She and her dad have been treading water since her mother’s death by suicide years ago. To figure out her future she delves into the past- opening her mother’s darkroom and devouring her journals. Along the way she documents her daily life with her trusty camera.

The “transmissions” about the future are very troubling and Glory wonders if she can/should do anything about it. The visions are kind of a nuisance for Ellie but eye opening to Glory. The “history of the future” that Glory transcribes reads like dystopia but also feels all too real. I was as caught up in the future story as I was in Glory’s path to finding herself.

I listened to the audiobook of GLORY, read by Christine Lakin. I always know I’m in good hands with Lakin. She has a great, clear, versatile voice with a pleasant tone & and doesn’t sound like she’s trying too hard to sound like a teenager. Her natural delivery lets A.S. King’s words shine and doesn’t distract. Sometimes high concept stories like this don’t translate well to audio, but that is not the case here. I’d choose the audio over print for this one. Take a listen:

GLORY is on sale now and is on all kinds of “best of” lists. I’m always on the lookout for feminist YA that I can hand to my teen and this one fits the bill, plus it has a great story about friendship, family, love and moving on. If you love contemporary YA, and A.S. King’s unique brand of storytelling you should give this one a try.

The Secret Side of Empty by Maria E. Andreu Book Review
Mailbox Monday (126)

6 thoughts on “Audiobook Review: Glory O’Brien’s History of the Future”