Five, Six, Seven, Nate! is the follow up to Tim Federle’s hilarious Better Nate Than Ever. In the first book, Nate ran away to New York to audition for E.T. the Broadway Musical. And now, Nate’s living his dream, immersed in rehearsals, and the politics of Broadway. Nate is back and better than ever in this utterly charming sequel. 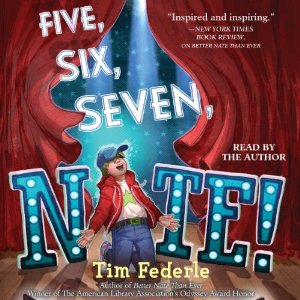 The Script:  Thirteen-year-old Nate lives in Jankburg, Pennsylvania, and his love of Broadway makes him stick out like a sore thumb among his peers. His family doesn’t get him (especially his jock brother and his dad), and he’s bullied at school. His best friend Libby though, is his acting coach, confidante, and fellow Broadway aficionado.

Now living in NYC with his aunt, Nate feels right at home on Broadway and gets to hang out with like-minded kids for the first time. There are some surprising twists on Nate’s road to stardom that make this installment a delight.

The State of Nate – Nate is a walking encyclopedia of Broadway facts, but is at a disadvantage when it comes to formal training. He makes up for it though with his photographic memory that makes learning the script a snap. Nate is overwhelmed that his dreams are coming true but he’s still his loveable self.

E. T. the Broadway Musical  – How I want to see this production! Tim Federle takes the reader backstage and shows all the politics, and blood, sweat, and tears that go into the making of a show. And they have such a short timeframe to put it all together- I was on the edge of my seat hoping opening night would go off without a hitch.

Heroes and Villains – There are so many colorful characters in this book, including a few that carry over from Better Nate Than Ever.  And we get to know these characters a little bit better and see that there’s more to some of the “villains” than meets the eye. One of my favorites of the new characters is one of the E.T. understudies that take Nate under her wing.

Still Questioning? – In Better Nate Than Ever, Nate was questioning his sexuality, while also admitting he’s a little young to figure it all out yet. The plot thickens in the sequel, as Nate has a secret admirer on set.  Nate is more open about his preference for boys in this book, but given the bullying he’s experienced in the past, he’s reluctant to fully admit it to himself let alone say it out loud. This is resolved though in a really sweet way, and kudos to Federle for handling Nate’s sexuality with such sensitivity.

Body Image – Another thing I appreciated was that Nate’s body image issues were addressed. We don’t often get to see boys talking about their insecurities in books, and as a young teenager Nate struggles with acne, body odor, voice changes, and the fact that his height hasn’t caught up with his weight. This just added a nice bit of realism to the story and makes Nate someone many teens will relate to.

Don’t Rain on My Parade – Nate is so positive and a little ball of energy. Other actors on set, stage moms, and production people give Nate feedback that could bring anyone down, but Nate is just professional as can be and just tries to do his best.

Screenwriting – Tim Federle hits all the right notes with this sequel. I was worried that it wouldn’t live up to the first book, but it was just as entertaining and satisfying. His own Broadway background makes this musical-themed book sing.

Voice Acting– Author Tim Federle returns to perform the audiobook, and makes the time fly by as you’re listening.  Federle brings a lot of energy to his reading and adds personality to all the characters. Tim Federle talks about the audiobook here:

Once more with feeling – Read Five, Six, Seven, Nate! if you like: musical theater, New York, middle grade books, laughter, heartwarming books, realistic portrayals of kids, and especially if you loved Better Nate Than Ever!

Congrats to David who won a copy of the audiobook!