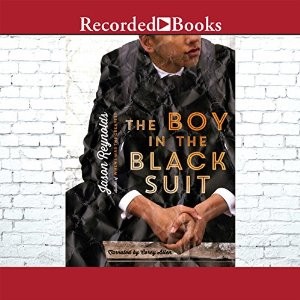 Also by this author: As Brave As You

Just when 17-year-old Matt thinks he can't handle one more piece of terrible news, he meets a girl who’s dealt with a lot more - and who just might be able to clue him in on how to rise up when life keeps knocking him down - in this wry, gritty novel from the author of When I Was the Greatest. Matt wears a black suit every day. No, not because his mom died - although she did, and it sucks. But he wears the suit for his gig at the local funeral home, which pays way better than the Cluck Bucket, and he needs the income since his dad can’t handle the bills (or anything, really) on his own. So while Dad's snagging bottles of whiskey, Matt's snagging fifteen bucks an hour. Not bad. But everything else? Not good. Then Matt meets Lovey. She's got a crazy name, and she's been through more crazy than he can imagine. Yet Lovey never cries. She's tough. Really tough. Tough in the way Matt wishes he could be. Which is maybe why he's drawn to her, and definitely why he can't seem to shake her. Because there's nothing more hopeful than finding a person who understands your loneliness - and who can maybe even help take it away.

I listened to Jason Reynolds‘ debut book When I Was the Greatest earlier this year and was eager to dive into his next book The Boy in the Black Suit. In The Boy in the Black Suit we meet Brooklynite Matt Miller on his first day back at high school following his mother’s death. This book deals with Matt’s grief, friendships, family, and romantic connection, and finding solace in a funeral home.

Matt’s having a hard time being back at school and just wants everyone to treat him like normal. But life is not normal- Matt’s dad is dousing his grief with alcohol, and now Matt has to get an after school job to help pay the bills. He gets a job from his neighbor Mr. Ray at the funeral home and finally feels some peace among the other mourners who share his grief.

Matt becomes the “boy in the black suit” because that is his work uniform, but he also wears it to school. (His other employment option was taking a job at a fast-food chicken place, especially when he sees the pretty girl behind the counter.) Mr. Ray takes Matt under his wing, looking out for him in and out of the funeral home when his dad is hospitalized following a car accident.

At the funerals Matt attends he sees some familiar faces in the caskets, and though some of the funerals are lighter in tone, there’s always someone that feels the death very deeply. And that is the one Matt zeroes in – someone who feels their loss as much as he does.

Matt also copes with his grief by listening to Tupac’s “Dear Mama” on repeat. Though Matt’s mother is only in the book through memories, her presence is felt and it makes the reader feel the loss of her as well. Jason Reynolds does a great job making Matt’s grief feel realistic and I imagine this book will be a comfort to YA readers who experienced a similar loss. (I could definitely relate to Matt)

There are also some light moments in this book with Matt and his crush Lovey. She comes into the book midway and is also someone who knows loss, and she helps him find his way out of the darkness a little bit. Matt’s friend Chris, his dad, and Mr. Ray are also an interesting part of this healing journey.

I listened to the audiobook, read by Corey Allen. I think Reynolds’ poetic prose is lovely to listen to and Allen is a good choice of narrator to bring his words to life. Allen’s pacing and tone are pitch perfect and he has an expressive voice for all the characters. I’d listen to him again, and I see he also narrates The Crossover– another one on my TBR.

If you enjoy realistic YA you should pick up Jason Reynolds’ first two books- he’s one to watch.

Audiobook Review: As Brave As You by Jason Reynolds
The Only Thing Worse Than Me Is You by Lily Anderson | Author Q&A

3 thoughts on “Audiobook Review: The Boy in the Black Suit by Jason Reynolds”