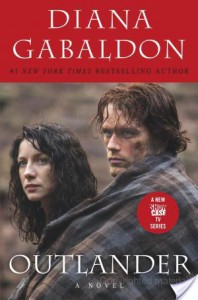 This stunning blend of historical romance and time traveling adventure has captured the hearts of millions of readers around the world and catapulted author Diana Gabaldon to the top of the New York Times best seller list. Outlander introduces an exhilarating world of heroism and breathtaking thrills as one woman is torn between past and present, passion and love.

In 1945, former combat nurse Claire Randall returns from World War II and joins her husband for a second honeymoon. Their blissful reunion is shattered when she touches a boulder in an ancient stone ruin and is instantly transported to 1743 Scotland, a place torn by war and raiding border clans. Will Claire find her way back to her own time, or is her destiny forever linked with Clan MacKenzie and the gallant James Fraser?

Like many other Starz viewers, I’ve succumbed to Outlander fever. I started watching the show this summer and slowly got more and more into it. Around episode 4 I got impatient to find out what happens next. That problem was easily solved- pick up the books!

I am verra late to the Outlander party so this is not really going to be a thorough review of the book. You’ve already read it ages ago, no?

I’ve had a copy of this book for years, but there it sat on my kindle waiting for the right time. Seeing the Outlander panel at Comic-Con this summer and meeting some encouraging fans sparked my interest in the series. I kind of wish I could time travel back to that panel, because I would totally appreciate it more now! The whole cast was there in this smallish room, and since the show hadn’t aired yet, there wasn’t as much excitement as there would be now.

Outlander the book is quite wonderful, with interesting characters, rich historical detail, and a compelling love story. I thought at first that there would be more time travel in the book, but the characters are pretty settled in one place in this book. Claire is a strong lead who rolls with the punches in her new environment. And the Scottish soldier Jamie stole my heart- together they make a great team. I can tell I’m in for a world of heartache with this series though. Every time things seem to be going well, the other shoe drops.

I switched back and forth between reading and listening to Outlander. The audiobook is over 33 hours long- by far the longest audiobook I’ve ever listened to. I’m used to audios that are more like half that length, but this series certainly maximizes your audible credits! I do think audio is the way to go with Outlander. Davina Porter is a skillful, engaging narrator, who is great with the Gaelic phrases and Scottish accents. Her Jamie voice is just as good as her Claire voice, which is quite remarkable. I’d forget I was listening sometimes, so caught up in the story.  I did speed up the narration to 1.25 and that was perfect for my ears.

I am so impressed with how faithful the Starz series is to the book. How beautiful the TV series is! I’m pleased with the adaptation so far, the cast is outstanding, and the story translates well to the small screen. From reading the book I know that things will get very heavy in the second half of the season, so I need to get mentally prepared for that.

This Saturday is the mid-season finale (sob), and the show returns with the remaining 8 episodes on April 4, 2015. And well, that’s a long time away, but in the meantime we have the books right? Plus, the series was renewed for season two so there are many more kilt drops in our future.

The mid-season finale, Both Sides Now, airs Saturday.  Looks like we get to see what’s been going on with Frank:

What do you think about the Outlander phenomenon? Have you read/re-read the books to watch the series? Do you like the adaptation?

19 thoughts on “Catching up with Outlander”