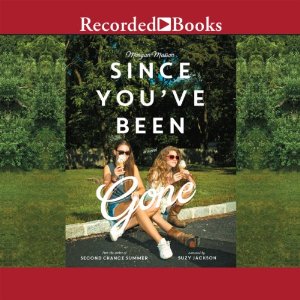 Emily is about to take some risks and have the most unexpected summer ever in this new novel from the bestselling author of "Second Chance Summer "and "Amy and Roger's Epic Detour." Before Sloane, Emily didn't go to parties, she barely talked to guys, and she didn't do anything crazy. Enter Sloane, social tornado and the best kind of best friend--someone who yanks you out of your shell. But right before what should have been an epic summer, Sloane just...disappears. No note. No calls. No texts. No Sloane. There's just a random to-do list with thirteen bizarre tasks that Emily would never try. But what if they can lead her to Sloane? "Apple picking at night?" Okay, easy enough. "Dance until dawn?" Sure. Why not? "Kiss a stranger?" Wait...what? Getting through Sloane's list will mean a lot of firsts, and with a whole summer ahead of her--and with the unexpected help of the handsome Frank Porter--who knows what she'll find. "Go Skinny Dipping?" Um...

In Since You’ve Been Gone, Emily’s summer plans go astray when her best friend Sloane suddenly disappears. A letter arrives in the mail with no return address, just a list of 13 items to complete. This to-do list is full of things outside of Emily’s comfort zone. Sloane has tasked Emily with these sorts of lists before, but this list in particular hits home and targets her biggest fears. (Kiss a Stranger, Ride a Horse, Hug a Jamie!) Emily challenges herself to check off each item (thinking they will help her find her wayward friend) and along the way gets closer to the friends who agree to help her.

You know how sometimes your best friend is the brave one, the life of the party, and without them you think you lose a big part of your identity? Sloane is that girl for Emily, the girl who pushes her to try new things, and without her she feels so lost. But accepting the list challenge forces Emily to make her own way in the world, and each completed task brings her new confidence.

Early in the summer Emily runs into Frank, a star student from school. His girlfriend is away for the summer, and he and Emily become running partners and list co-conspirators. Spending so much time together getting to know each other and sharing playlists gets them closer, and Franks does seem a little jealous with the “Kiss a Stranger” portion of the list. Emily knows Frank has a girlfriend though the lines are getting blurry.

Though the story starts out with the mystery of Sloane’s disappearance, soon Emily’s list quest takes center stage. Meanwhile, we do get to learn more about the elusive Sloane through flashbacks.

I listened to the audiobook of Since You’ve Been Gone, read by Suzy Jackson (she also narrates Matson’s Amy & Roger’s Epic Detour). Jackson’s voice is age appropriate for Emily and pleasant to listen to. I thought she conveyed the right emotional tone for the story and that the book translates well to audio overall. The print edition of the book (which I also have on hand) includes song playlists, so that is something you don’t get in the audio version but then again it would be tedious to listen to a list of songs/artists. (You can find some of the playlists on 8tracks.com) I find that Matson’s books translate really well to audio, and SYBG is no exception.

Like Matson’s other books, SYBG’s focus is on friendship and personal growth (with a little slow burn romance) and has a fun summer backdrop. The ending is really satisfying, and ties up Emily’s personal growth in a fun way. I always find Matson’s books a little bittersweet too, and I like that her books are a little open ended. SYBG is recommended for fans of Sarah Dessen, Emery Lord, and Huntley Fitzpatrick- a sweet summertime read to enjoy any time of year!

Giveaway: If you’d like to win my copy of the Since You’ve Been Gone audiobook, I’ll send it to the first person that emails me to request it. (US/Canada please)

Give it up for the 10 year anniversary of Kelly Clarkson’s Since U Been Gone! I definitely had this song in my head while I was reading this one.