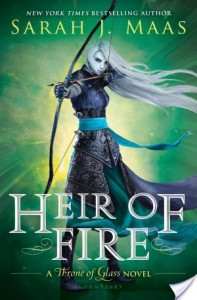 Celaena has survived deadly contests and shattering heartbreak—but at an unspeakable cost. Now, she must travel to a new land to confront her darkest truth . . . a truth about her heritage that could change her life—and her future—forever. Meanwhile, brutal and monstrous forces are gathering on the horizon, intent on enslaving her world. Will Celaena find the strength to not only fight her inner demons, but to take on the evil that is about to be unleashed?The bestselling series that has captured readers all over the world reaches new heights in this sequel to the New York Times best-selling Crown of Midnight. Packed with heart-pounding action, fierce new characters, and swoon-worthy romance, this third book will enthrall readers from start to finish.

In the third installment of the Throne of Glass series, Heir of Fire, Celaena Sardothien embarks on a life-changing journey. New alliances are formed as tensions run high in the kingdoms.

Though I don’t usually have a lot of luck with fantasy series, I do enjoy this character-driven series quite a lot. Celaena’s a great heroine who has grown a lot over the course of the series. And the stakes keep getting higher for her. With the action moved to unfamiliar territory and Celaena on a new path, this is a transitional phase for her. I did miss Celaena’s interactions with her friends from the first two books, but we do meet a kick-ass new character in exchange so that’s almost a fair trade-off.

The fantasy elements really ramp up in this installment, and we get more acquainted with fae and witches. The action shifts between three separate but related stories in Heir of Fire– Celaena’s journey, the characters left behind in Adarlan (Dorian, Chaol, etc.) and the Blackbeak coven. I have to admit the chapters with the witches went over my head. There is a new character named Manon Blackbeak who seems important but for the life of me I couldn’t keep up with that storyline. I will definitely have to read a Recaptains recap before the next book.

What kept my interest is Celaena’s personal journey and revelations. I liked her alliance with Rowan, the fae prince. The prickly Rowan is a great addition to the series, and I’m curious to see what role he takes going forward.

Back in Adarlan, Chaol and Dorian are quite downcast without Celaena’s company, though it’s not long before they get distracted other pressing matters. Chaol seemed kind of lost in this installment and I hope for more Chaol and Celaena in the next book. A new character causes some trouble for Dorian and Chaol and I’m interested to see how the situation in Adarlan shakes out. Dorian really got to me in this book – lots of character growth there.

The romance is downplayed in this installment compared to Crown of Midnight, but that makes sense considering the journey Celaena is on. The strong friendships that build in Heir of Fire make you (almost) not notice the lack of romance.

This series really shines in audiobook format, with the excellent performance by Elizabeth Evans. She pronounces all those tricky words for you so you don’t have to try to make sense of them on your own. Evans gives a strong and consistent performance here and doesn’t distract for the story. She brings many different types of characters to life and is especially successful with capturing Celaena’s essence. Since Heir of Fire is over 20-hours long, you’ll get your money’s worth of your Audible credit. Check out a sample:

This installment is a game changer in a lot of ways with so much to ponder and digest. The slow-burn action pays off in the end and leaves you clamoring for the next book. The fourth book is due out sometime next year, and meanwhile I still have The Assassin’s Blade to get through.

Have you read Heir of Fire? I’d love to know your thoughts on the book!

3 thoughts on “Heir of Fire by Sarah J. Maas Audiobook”