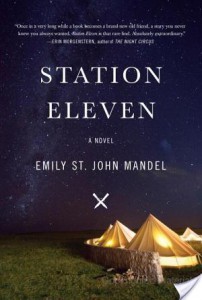 One snowy night a famous Hollywood actor slumps over and dies onstage during a production of King Lear. Hours later, the world as we know it begins to dissolve. Moving back and forth in time-from the actor's early days as a film star to fifteen years in the future, when a theater troupe known as the Traveling Symphony roams the wasteland of what remains-this suspenseful, elegiac, spellbinding novel charts the strange twists of fate that connect five people: the actor, the man who tried to save him, the actor's first wife, his oldest friend, and a young actress with the Traveling Symphony, caught in the crosshairs of a dangerous self-proclaimed prophet. Sometimes terrifying, sometimes tender, Station Eleven tells a story about the relationships that sustain us, the ephemeral nature of fame, and the beauty of the world as we know it.

I’m very pleased to welcome Andrew to the blog today with a special guest book review. You may know him from his Movie Date posts, but he wanted to share his thoughts on a book that’s getting a lot of buzz: National Book Award finalist Station Eleven by Emily St. John Mandel. Make sure to leave him some reading encouragement and recommendations below. Take it away, Andrew!

It may be alarming for Reading Date readers to read that Reading Date’s husband actually read a book. But I did, and looks like I picked the right one. On the surface, Station Eleven is a dystopian tale of a world ravaged by a very deadly virus (the charmingly named Georgia Flu). Over a decade after the catastrophe, the Traveling Orchestra, a theatrical troupe and musical ensemble, tours the ragged, post-electric landscape of the East coast, using Beethoven and Shakespeare to preserve a little civilization amidst the desolation and madness.

In itself, this premise would make for a fascinating thriller. But it’s just the starting point for Canadian-American author Emily St. John Mandel’s brilliant, kaleidoscopic work. Curiously, it revolves around a character who’s dead almost as soon as we meet him: Arthur Leander, a middle-aged Hollywood actor trying to regain his cred in live theater, collapses onstage in the middle of a performance of King Lear. But in a way he’s lucky; within weeks, nearly every other human will succumb to the Georgia Flu.

The book follows a handful of characters touched by Arthur’s life and death. These include his first wife, comic-book author Miranda; papparazo turned paramedic Jeevan, and Arthur’s lifelong friend Clark, later the keeper of the Museum of Civilization. But most interesting, and most likely our protagonist, is rugged Kirsten of the Traveling Symphony, sort of a thespian Katniss. As a child actress Kirsten was onstage when Leander died, and in the fifteen years since the plague passed, she’s regarded him as a guiding spirit and even father figure. She sifts through the detritus she finds in the homes of the dead, looking for clippings and photos of Leander’s life. Along with the rest of the troupe, she spends her time rummaging for food and defending herself against attacks from desperate travelers, including one dark figurehead known only as The Prophet.

But we spend less than half the book with the Symphony in the dead future. We skip around pre- and post-plague, finding connections between characters and time periods, looking in on Miranda and Arthur’s courtship and dissolving marriage, on Jeevan’s struggle to survive in the wake of the Georgia Flu, on the ad-hoc village formed in an airport by stranded passengers. It’s certainly an unconventional story; you’d be hard-pressed to identify the protagonist or what he or she hopes to achieve. Yet the complex, multifaceted narrative does resolve itself beautifully. I finished the book filled with hope and closure, though I was sad to say goodbye to its wonderful characters.

What stays with me is Mandel’s great affection for every one of her creations, and her love for humanity’s art and beauty. And talk about beautiful: she can string words together gorgeously. “… a Pomeranian who shines like a little ghost when Miranda calls for her at night, a white smudge in the darkness at the end of the yard.” As she describes a civilization with dead devices forced to speak face to face, you also sense that she yearns for a simpler, more personal world. If humanity should ever falter as described here, I hope that Emily St. John Mandel is around to write our memoirs—we couldn’t ask for better. 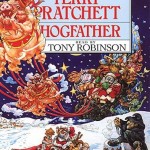