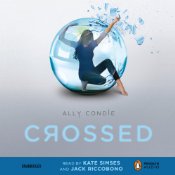 Crossed is the second book in the dystopian Matched trilogy about Cassia’s life in the restrictive Society. Cassia is matched with Xander though feels she is meant to be with the aberration Ky, who through a computer glitch shows up as her match. I liked Matched and found the dystopian elements interesting and suspenseful.  Matched also had a strong love story, and after the exciting conclusion I was eager to read the sequel. In Crossed, the story shifts direction as Cassia and Ky are separated in different work camps in the Outer Provinces and yearning for each other.  They each take turns with the narration so we can follow along on their separate adventures, as they learn more about the Rising. I was excited to experience this installment through audio format this time around.

Right away I noticed that the tone of Crossed felt very different to Matched. The story moves at a much more leisurely pace that made it very hard to stay engaged. And while there are some events that moved the plot along, it felt that it took too long to get to the point of the story, so that the ending did not feel as impactful as it could have. I remember wanting to learn more about areas outside of the Society after reading Matched, but the change in setting didn’t actually interest me as I thought it would and didn’t bring the answers I hoped for.

I did like the dual narration, and enjoyed getting Ky’s perspective for a change of pace, and it helped to liven up the story. It was interesting to learn more about his background this time around. There are also some new characters introduced from the work camps, including Cassia’s new frenemy Indie.  Cassia does show some growth, as she has to survive on her own and decide what role she wants to play in the uprising. I just wish there was more action and less internal monologue to keep things moving.

Kate Simses and Jack Riccobono capably narrate the audiobook.  Cassia’s character is read with the youth, innocence and naivety that you’d expect from Matched. And Ky’s narrator also effectively brings Ky’s voice to life and also does well with the other character voice nuances. They each succeed with the material and the audio format makes the character voices more distinct.  Cassia’s character voice does sound very young, and not as mature as other heroine’s from dystopian books such as narrator’s Sarah Drew in Delirium or Emma Galvin in Divergent. You can listen to an audio sample here to get a feel for the book to see if you’d like to try the audio format.

The writing is pretty and descriptive overall and the series has potential, but this installment left me wanting more. Hopefully more answers will be forthcoming in next year’s trilogy conclusion.