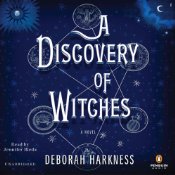 I am late to the Discovery of Witches party. And frankly, the idea of a 24-hour audiobook was very intimidating. But with the’ sequel in hand, I knew I’d better catch up with the series, because I had a feeling I would be too lost if I skipped it. Jennifer Ikeda’s narration made the time fly by and I soon found myself lost in the world of witches, vampires, demons, and a mysterious lost manuscript. The over-protective vampire romance is familiar, but the historical details and setting kept me intrigued.

Diana Bishop is a dormant witch and a scholar doing some research at Oxford’s Bodelein library. She comes across a valuable manuscript in her research and after she finds it she becomes a demon magnet. Even though she no longer has the manuscript in her possession, paranormal creatures stalk her in hopes that she will re-obtain the manuscript and break its spell.  One such creature is vampire geneticist Matthew Clairmont, and he’s taken more than a passing interest in Diana, and wants to protect her.

Though Diana has lived her life without using her witch powers, it seems they are ready to be unleashed now. If only she could control them and believe in herself. Matthew is more than happy to look after her, even though their relationship breaks all kinds of rules in their world and puts them both in danger. Matthew plays the controlling, handsome, brilliant, rich vampire role to perfection and is determined to stay by Diana’s side. He wines and dines Diana and takes her to a supernatural yoga class, and she’s smitten in no time. If you are a fan of vampire romances, this is the book for you.

The story changes setting a couple of times, letting us get a glimpse into Matthew and Diana’s background. I liked the Paris chapters with Matthew’s mother who provides insight into Matthew’s character. But things really got going later at the Bishop House in New York, with Diana’s aunts. The house is a really cool character all in itself, and kind of reminded me of the Glass House in Morganville, but to the extreme. We meet a lot of characters over the course of the story, and the house gets very crowded quickly, though that problem is solved in a clever way.

It wasn’t hard to keep track of the large cast of characters because Jennifer Ikeda’s (Gilt) narration and well-done accents helped me keep everyone straight. She has a pleasant voice to listen to over many many hours, and I liked her interpretation of the characters. Like the book, Ikeda reads at a leisurely pace, and I did end up speeding things up a bit with the Audible app. It wasn’t a frustration I had with the narration, but more with the pacing of the book. In the end I think Ikeda made the story more interesting, and I highly recommend the audio.

This book is a good YA/Adult crossover book, especially for fans of paranormal romance and character driven books. Keep in mind this is the first book in a series so don’t expect everything to be wrapped up in this installment. The sequel, Shadow of Night, is out now and I’m excited to see where it goes.

10 thoughts on “A Discovery of Witches by Deborah Harkness: Audiobook Review”