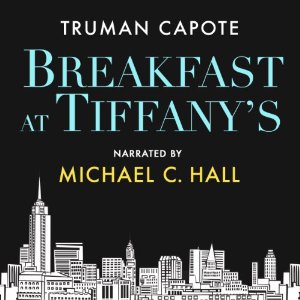 Audible has been very successful with pairing celebrity performers with classic works of literature with their A-list collection. Last year’s End of the Affair, read by actor Colin Firth, won audiobook of the year in fact. The latest star-powered listen pairs Michael C. Hall with Truman Capote’s classic novella Breakfast at Tiffany’s.

I’ve never read Breakfast at Tiffany’s before this, though I saw the movie years ago. I was surprised to learn that the book is so different than the movie, and I feel like I need to watch it again now to compare. If you’ve only seen the film version of Breakfast at Tiffany’s you may be interested to read the source material behind the classic film. The tone is totally different, and there are some major plot changes.

The story centers on Holly Golightly, a flawed and flighty girl of nineteen living in New York City. She wakes up her neighbors late at night, and asks them to let her into her apartment since she always forgets her key. That’s how she meets her neighbor, the unnamed narrator of the story. Holly dubs the narrator Fred after her brother, and the two become friendly. “Fred” is a writer, and the free-spirited, dark and damaged Holly is his muse. Fred gets caught in the web of Holly’s crazy life.

Breakfast at Tiffany’s was originally published in 1958 and the slim novella packs a lot of story into its 150 or so pages. Truman Capote’s writing makes you feel like you’re the narrator getting to know Holly, and leaves you just as captivated/confused/appalled as he is. It is a complex character portrait that kept me guessing to the end.I can imagine this book was quite controversial for its day, especially in regards to the frank discussion of sexual identity, and even gay marriage.

I listened to the audiobook, performed by Michael C. Hall, who is an actor known for his portrayal of part-time serial killer Dexter Morgan on Showtime’s Dexter. This is his first audiobook performance, and he really commits to the story. I think the audiobook is the perfect way to experience the book for the first time. Hall’s tone has a richness to it, and he makes each character sound distinct. Hall uses different accents and voices in his performance that help to paint a vivid picture. I preferred his male voices in the audiobook overall, but Halls’ Holly captures her quirky and complicated essence. At just under 3 hours long, this audiobook delivers a compelling, nostalgic story.

Check out a sample from Breakfast at Tiffany’s, performed by Michael C. Hall:

Professor Gargoyle: Tales From Lovecraft Middle School #1 By Charles Gilman: Book Review and Giveaway
Waiting On The Other Way Around by Sashi Kaufman
The Statistical Probability of Love at First Sight by Jennifer E. Smith
Lola and the Boy Next Door: Audiobook Review
Define Normal by Julie Anne Peters Audiobook Review