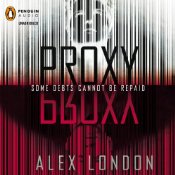 Whoa, this was an intense ride! I wasn’t expecting Proxy to pack such an emotional punch, but it got to me. Proxy is part SciFi adventure and social commentary on the haves and have-nots.  It’s also loosely based on the 1986 children’s book The Whipping Boy. I wasn’t familiar with the title, but similar to Proxy, it’s the tale of a rich, spoiled kid who is provided with an orphan to take his punishments for him. Proxy is the futuristic update of the story, and the wealthy teens are called Patrons, and the orphan debtors are called Proxies.

Proxy is the story of one patron/proxy pair. Patron Knox is spoiled and selfish, and frequently misbehaves, so his poor Proxy Sydney is always paying the price. When Knox gets in particularly bad trouble, Sydney faces a brutal punishment. Ironically the only one that can save him is his patron, Knox, and this pair that was never supposed to meet, have to work together to change the world.

The orphan proxies are in their predicament due to a debt they owe society. They own nothing, not even their own names. Their names are assigned from forgotten, out-of-context works of classic literature. Syd’s name, Sydney Carton, is taken from Dickens’ A Tale of Two Cities. And he crushes on a boy named Atticus Finch. It’s refreshing that the main character in this dystopia just happens to be gay, and it brings an interesting dynamic to the story.

Syd and Knox are both flawed characters in their way, and Knox especially is pretty unlikable for a lot of the story. But it’s gratifying to see their characters develop over the course of the book, and Knox really won me over. The chapters alternate with Syd and Knox’s perspectives so we can see where both of them are coming from. Along for the ride with the pair is a female friend, and she has a smaller yet important role in the characters’ journey.

Proxy is action packed and exciting like my favorite type of dystopias such as The Hunger Games and Divergent. And like those books, Proxy gets the reader comparing the troubled world of the future with the problems in the world today. The third act meandered for me a bit, but was more than made up for with the powerful ending.

I listened to the audiobook of Proxy, read by Andrew Sweeney, and it’s my first experience with his narration. He makes Knox sound like the charming sort of jerk that he is, and Syd sound appropriately more humble and sincere. He does well with the accents and female voices as well; they are not overdone and distracting. Sweeney’s pacing is appropriate to the tension and action of the story and made the book come alive.

I think Proxy has wide appeal for SciFi, action and contemporary fans. The characters, unique setting and social commentary got me thinking. I could easily imagine this one as a movie. The ending is strong on its own, but I’m glad that there will be even more closure with the final book in the duet, Guardian, due out next year.