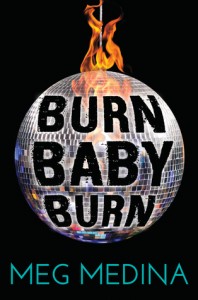 Nora Lopez is seventeen during the infamous New York summer of 1977, when the city is besieged by arson, a massive blackout, and a serial killer named Son of Sam who shoots young women on the streets. Nora’s family life isn’t going so well either: her bullying brother, Hector, is growing more threatening by the day, her mother is helpless and falling behind on the rent, and her father calls only on holidays. All Nora wants is to turn eighteen and be on her own. And while there is a cute new guy who started working with her at the deli, is dating even worth the risk when the killer likes picking off couples who stay out too late? Award-winning author Meg Medina transports us to a time when New York seemed balanced on a knife-edge, with tempers and temperatures running high, to share the story of a young woman who discovers that the greatest dangers are often closer than we like to admit — and the hardest to accept.

It’s the summer of 1977 and it’s a dark time for New York. The city is on edge due to the Son of Sam serial killer, and a 25-hour blackout brings out looters and arsonists. Recent high school grad Nora López is trying to make plans for the future and leave her troubled home life behind but she can’t see a way out. Check out the book trailer for Meg Medina’s Burn Baby Burn:

Nora lives with her brother and mother in an apartment in Queens. She works as a cashier at a local deli, while her mom is struggling to keep job and keep her family housed and fed. Her dad has remarried and calls on holidays to check in. Meanwhile, Nora’s brother Hector has stopped attending school, has a violent temper and is a budding pyromaniac with a drug habit. Nora’s mom has completely lost control and Nora as the older sister is expected to look after him. She keeps this part of her life hidden from her best friend Kathleen and her new love interest Pablo.

Nora’s romance with Pablo is heightened with danger since the notorious Son of Sam killer targets young couples and the discos they frequent. She keeps him at arms length as she guards her family secrets.

This story is gripping and emotional and the ‘70s historical and pop culture nods made for a fascinating backdrop. Though the fashions and music referenced are from another era Nora’s emotional coming-of-age story is timeless.

There are not many historical fiction YA books set during the mid-seventies and I think this one is relevant to what’s going on today. The topic of women’s rights, crime and police brutality, and economic inequality are some of the similarities. In 1977 we also saw the first Star Wars release, and now we have a repeat of Star Wars fever with the recent reboot.

Meg Medina (Yaqui Delgado Wants to Kick Your Ass) knocks it out of the park again with Burn Baby Burn. Readers of realistic YA and ‘70s nostalgists need to boogie on down to the bookstore and check it out!

1977 was a turning point year in music- it was the height of disco and the beginning of punk. Check out some of the songs referenced in the book and in Meg Medina’s own playlist in this Spotify mix: