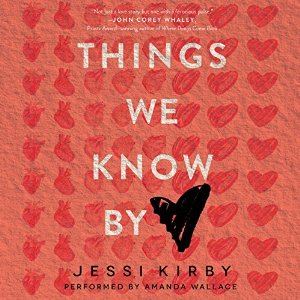 Also by this author: In Honor, Golden

Quinn Sullivan lost the love of her life when her boyfriend, Trent, died in an accident their junior year. In an attempt to get closure, she reached out to the recipients of his donated organs. Though some answered her letters, the one Quinn feels matters most - the person who received Trent's heart - has been silent.

Nineteen-year-old Colton Thomas has spent the last several years in and out of hospitals, waiting for a heart transplant. Now that he's finally received a new heart, Colton is regaining strength, and he's walking away from his bedridden past with no intention of looking back. He doesn't want to know about the person who had to die so he could live. He wants only to move forward.

But Quinn can't let it go. Venturing outside the system to find Colton, Quinn takes a risk in hopes of finally laying her memories to rest. But what begins as an innocent conversation quickly becomes an attraction - and to make matters worse, Colton has no idea how they're connected. His zest for life pulls Quinn from her months of sorrow but leaves her torn between honesty and utter betrayal. Because no matter how hard she's falling for Colton, each beat of his heart reminds her of all she's lost.

Quinn has been marking the days since her boyfriend Trent’s untimely death. Her family wants her to move on, though Quinn thinks connecting with the boy who received Trent’s heart could give her the closure she seeks.

Jessi Kirby’s fourth book is moving, sweet, and hopeful and has a great beach setting. The book tackles matters of the heart (figuratively and literally) and features a heart-quote or fact at the beginning of each chapter.

I imagine knowing that my loved ones organs were helping someone else to live would give me comfort. It does give some solace to Quinn to meet with some of Trent’s organ recipients. But when the heart recipient doesn’t want to get in touch, Quinn can’t let it go. She does a little online sleuthing to find out the name and location of Colton, the surfer boy who received the heart. She doesn’t want to intrude on his privacy – only to see that he’s doing okay. She didn’t count on them making a connection.

Quinn and Colton have an awkward meet-cute that bonds them together in unexpected ways. Though Quinn is reluctant to start anything with this boy who has her boyfriend’s heart, she can’t deny their connection. All of their scenes have an underlying tension though since Quinn is not honest about what brought her to Colton. (To be fair, Colton is not forthcoming about his health issues either) I kept waiting for the other shoe to drop in their otherwise very sweet summer.

I could relate to Quinn’s feelings of loss and grief. People expect you to be able to move on after a certain amount of time has passed, so Quinn has to hide her grief from her family. They are happy that she has a new friend and is getting out there and having fun. I wanted her to heal as well, and Colton is a ray of sunshine for her. But, you know, it’s complicated.

I listened to the audiobook of Things We Know By Heart, read by Amanda Wallace (narrator of Boomerang by Noelle August). This is actually the first audiobook version of any of Kirby’s books- hopefully there are more to come. This is a quiet sort of book that needs a narrator who reads with emotion and yes, heart and Wallace does a good job letting the words take center stage. This is a tranquil read that you can listen to at the beach as you let the words wash over you. The only thing I missed from the audio version is that I wanted to see the “heart” quotes in print to appreciate them more before the next chapter began.

Jessi Kirby’s words are lovely and really set a mood. I’ve read 3 of Kirby’s books now (I don’t know why I’m saving Moonglass for last!) and they are my favorite kind of YA contemporary reads. Pick this one up if you are a fan of books about grief, family and love.

I listened to this audiobook on Scribd. New members can get 3 months free with this promo code: https://www.scribd.com/promo/TheReadingDate (good until 9/21)

One thought on “Audiobook Review: Things We Know By Heart by Jessi Kirby”