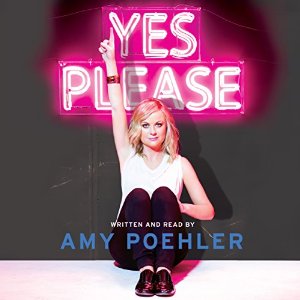 Amy Poehler is hosting a dinner party and you're invited! Welcome to the audiobook edition of Amy Poehler's Yes Please. The guest list is star-studded with vocal appearances from Carol Burnett, Seth Meyers, Michael Schur, Patrick Stewart, Kathleen Turner, and even Amy's parents - Yes Please is the ultimate audiobook extravaganza.

While listening to Yes Please, you'll laugh, you'll cry, and you'll become convinced that your phone is trying to kill you. Don't miss this collection of stories, thoughts, ideas, lists, and haikus from the mind of one of our most beloved entertainers. Offering Amy's thoughts on everything from her "too safe" childhood outside of Boston to her early days in New York City, her ideas about Hollywood and "the biz", the demon that looks back at all of us in the mirror, and her joy at being told she has a "face for wigs" - Yes Please is chock-full of words, and wisdom, to live by.

In Yes Please, Amy Poehler (Parks and Recreation, SNL) shares stories about her upbringing and career, and also offers some sage life advice. Poehler is a welcome addition to the list of funny celebrity essayists, and like her character Leslie Knope makes you laugh and makes you think.

I’ve been a fan of Amy Poehler since she was on SNL, and adore her on Parks and Recreation, and seeing her host award shows with Tina Fey. I had high hopes for this collection – anticipating the humor of Fey’s Bossypants and Mindy Kaling’s Is Everyone Hanging out Without Me. This memoir/life lessons collection is not LOL funny throughout like the previously mentioned books, but I really appreciated how Poehler puts herself out there and how heartfelt her story reads. I appreciate her on a new level now, and she also just seems like someone who would be fun to grab a drink with.

Poehler recounts her early years struggling for comedy gigs, and paying the bills waitressing. She talks about doing improv with the Upright Citizens Brigade in New York. And bestie Tina Fey (they met in Chicago in the 90s) gets her own chapter.

Fans of Parks and Recreation will enjoy hearing Poehler talk about the cast and favorite moments. (There are even audio clips from the show in the audiobook) And SNL fans will get a kick of hearing about Poehler’s experiences there. She talks about portraying Hillary Clinton, Kaitlin, being part of the first all-female Weekend Update duo, and her strong friendship with Seth Meyers.

Poehler digs deep to talk about her divorce, and shares a difficult story of an SNL sketch she was involved in that offended and caused some hurt feelings. Poehler dedicates the book to her two sons, and shares parenting stories.

Poehler’s Yes Please has tidbits of advice about everything, including sex, drugs, beauty, and how to handle award show nominations. She sounds like she’s just the greatest friend to have in your corner and is so supportive of her peers.

Amy Poehler narrates the audiobook, along with some special celebrity guest, and Poehler’s own parents. Sometimes actors don’t make the best narrators, but Poehler is a natural. She sounds like she’s talking to a friend, and makes the book an entertaining listen. She hands the reins to Seth Meyers to narrate a bit, and he also does a great job. The last chapter of the book is a funny, live performance at the Upright Citizens Brigade and it ends the book on a high note.

This book is a must-read for Amy Poehler fans or fans of humorous celebrity memoirs. Take a listen: