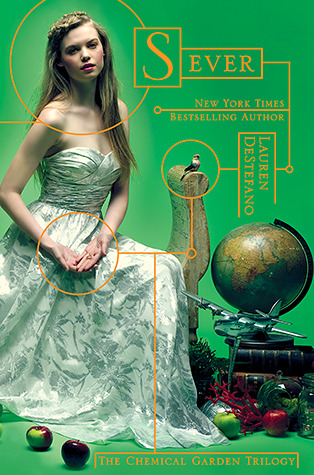 The conclusion to the Chemical Garden trilogy is something I’ve been dreading. There’s been so much sorrow and heartbreak thus far I was scared of what more Lauren DeStefano could do to these characters. Turns out she had several tricks up her sleeve to shock and surprise in Sever when you least expect it. The series finale is bittersweet but gave me enough closure to let go.

It’s been a year since I read Fever, but it was easy to get re-acquainted with the story. These are dark days for the heroine Rhine, separated from Gabriel and her brother Rowan, and knowing that she doesn’t have much time left before she succumbs to the virus.  She’s matured during her time away from the mansion, and is determined to get to her brother. But her sister wife Cecily has also hardened and wants to help Rhine, and Linden’s complicated feelings won’t let him turn his back on her either. The group travels to Vaughn’s brother Reed’s place to work out their next steps.

It’s hard to talk about anything else plot related since this is the end of a series. But suffice it to say there are big shocks and reveals. Rhine questions everything she has ever known and gets some sobering news. DeStefano keeps the reader guessing about who are the real good guys and bad guys this time around.

Like the previous installments, Sever is a moody and atmospheric read. The plot moves at a gentle pace, almost giving a false sense of security. It had me on edge, as if I was reading a horror novel, and I paced my reading even though I was anxious to see how it all turns out. DeStefano’s distinctive writing style with its dark tone is what will linger most for me about this series.

In Sever, the action moves to several different settings. I wasn’t thrilled that the carnival made another appearance, but it actually fit very well in the story. I liked the addition of Reed, and the scenes at his place are some of the most alive. Cecily is someone I barely tolerated in the previous books but she does liven up the book, and she and Reed are a breath of fresh air, when Linden and Rhine are a little moody.

After reading Sever, I liked examining the cover to note the relevance of the objects in the cover photo. I don’t think I could have guessed exactly how they all fit before I read the book, but they do all tie-in to the story.

I have mixed feelings about the ending, but overall I think it is the right conclusion for the trilogy. It feels complete, and I’m ready to move on to DeStefano’s next series. The first book of the Internment series, Perfect Ruin, is due out next year.