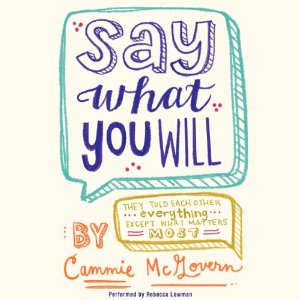 Amy and Matthew didn't know each other, really. They weren't friends. Matthew remembered her, sure, but he remembered a lot of people from elementary school that he wasn't friends with now.
Matthew never planned to tell Amy what he thought of her cheerful facade, but after he does, Amy realizes she needs someone like him in her life.
As they begin to spend more time with each other, Amy learns that Matthew has his own secrets and she decides to try to help him in the same way he's helped her. And when what started out as a friendship turns into something neither of them expected, they realize that they tell each other everything - except the one thing that matters most.

Say What You Will is about Amy and Matthew; two people that get each other in a way no one else can. They both have disabilities that set them apart from their classmates – Amy has cerebral palsy and Matthew has OCD. But together they “fit.” Their friendship is not without complications but like real life it’s messy and real.

I read an e-galley of this book back in January, and let it sit for a while until I knew what I wanted to say about it.  I liked the story very much but I wasn’t sure about the twist that happens in the third act and needed some time to let it marinate. Time wore on with no words in sight, and here I am giving it an audio “re-read” with a fresh set of eyes/ears.

This book features two outsiders that form a friendship so I totally get the Eleanor & Park (and The Fault in Our Stars) comparison you see in the official description. If you like those books you will probably like this book as well, though Cammie McGovern (fun fact: sister of actress Elizabeth McGovern) forges her own path with her novel.

Amy has cerebral palsy, uses a walker to get around and a voice tablet to communicate. She excels in school in every area except socially, and aims to remedy that in her senior year of high school. She convinces her mom to hire peer aides instead of a professional aide to help her out at school as a way to break the ice and make some friends. She particularly wants Matthew to apply because he’s the only person that really sees her and tells it like it is. Matthew, along with four other students/aides, alternate days with Amy, and before long their connection deepens. Matthew’s OCD tendencies work in his favor to make him an attentive and thorough aide, though Amy wants him to set his sights higher.

Amy and Matthew both have their challenges to overcome, though McGovern shows that they have the same hopes and dreams as everyone else. Everyone has their issues, as we see in Amy and Matthew’s friendship circle, and some are just more visible than others.

With the trend being alternating first-person pov, it’s refreshing that McGovern chooses third person pov for Say What You Will. I still was able to connect to both Amy and Matthew, though the third person format also created a barrier that was somehow appropriate to the story. McGovern does a great job of keeping the tension up throughout the novel, through distance, and other twists in the narrative. This is an emotional book that I thought about even when I wasn’t reading it. I still kind of wish McGovern didn’t have to go there with the twist in this novel, though I get that it made sense for the characters to go through this challenge.

Rebecca Lowman (Eleanor & Park) performs the audiobook, furthering the E&P comparison. Lowman’s voice works well for mature YA titles like this, and I like listening to her because her vocal work complements the story and doesn’t detract. I did speed up the audiobook though to about 1.5x since this was a “re-read” for me – the audio quality was still good at that speed so take from that what you will. In the book there are some email and text exchanges between Matthew and Amy so if that is a pet peeve for your audio listening (hearing the email addresses called out several times) you may want to pick up the print edition. I didn’t find it annoying personally.

Read Say What You Will if you like: Smart contemporary YA, quirky characters, books that challenge you, and a side of  dramarama in your stories.

Half a World Away by Cynthia Kadohata Audiobook Review