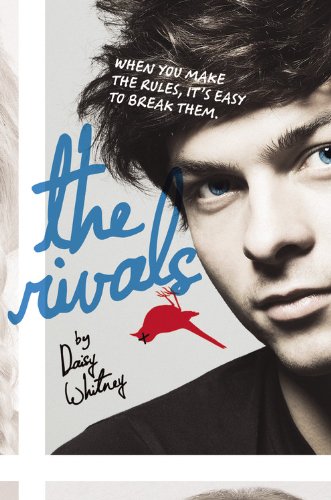 The Rivals is the sequel to last year’s The Mockingbirds, a book about boarding school students who start their own justice committee when the school leadership turn a blind eye to student crimes.  Gifted music student Alex took a date rape case to the Mockingbirds and now has a leadership role in the group to help other students. This time around the issue is a drug fueled cheating ring on the debate team and is a whodunit for Alex and the Mockingbirds to solve.

It has been a while since I read The Mockingbirds, but I got quickly up to speed in The Rivals. The students seem a little older in this series, so much so that I thought they were in college. Though they seem grown up, they make some bad decisions, which is where the Mockingbirds come in. The latest case is a tricky one for the vigilante group due to the relationship of the accused to members of the Mockingbirds, and that this time the victim is the entire student body. The Mockingbirds go on a wild goose chase to find the real culprit behind the cheating ring.

There are some growing pains for the Mockingbirds as they get used to their new group dynamic and their evolving role in the school. I think it makes sense that the group would be under scrutiny, when you have a small court making decisions for the whole school. Their role is interesting to me and I like that they have taken the responsibility of making student offenders accountable when the faculty is not doing their job. It did seem like too much for the students to take on though – I wouldn’t want my child to go to a school that doesn’t protect them.

Solving the crime is part of the fun in The Rivals. Every time I thought I had it figured out, there would be something new to shed doubt on another character. New as well as familiar characters at Themis Academy are under the microscope in the latest scandal.  Alex has to make hard choices in her leadership role with all the conflicting evidence.  She has grown a lot as a character even though she is realistically still dealing with the after effects of the date rape, and everything doesn’t go perfectly for her in her first case.

I like how Daisy Whitney incorporates the arts into the series through the characters interest in literature, music, dance and drama. The new characters fit in well, as there are new villains and allies in Alex’s world. In addition to the Mockingbirds and Alex’s road to Julliard, the romance story also heats up.  And the introduction of a potential rival for Alex’s affections also caught my interest.

I liked the way this book got me excited to read more about these characters. In a way, both books in the series work well as standalone’s but The Rivals takes the drama to the next level and heightened my interest in the series. I don’t know if there is a third book but there are a few juicy storylines that I’m interested to see how they play out.  If you like older YA books with ethical dilemmas or just enjoy a good mystery, give this series a try.

3 thoughts on “The Rivals by Daisy Whitney”