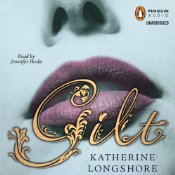 More Info: Listen to a sample @ Audible | Read an excerpt | Add to Goodreads

In Katherine Longshore’s debut Gilt, two friends experience the royal life when one of them marries King Henry VIII.  The Tudor court is full of secrets, gossip, deception, and betrayal and the two friends are not immune to the drama. King Henry’s fifth bride, Catherine Howard, is a mean girl of the highest order who rivals any modern day queen bee, and it’s only a matter of time before her web of lies is exposed. Cat’s partner in crime is the naïve Kitty Tylney, faithful to the Queen of Misrule to a fault. Even though history says their story is doomed from the start, the read still enthralls. I listened to the audiobook of Gilt and the British accented performance of Jennifer Ikeda set the perfect ambiance for the story.

King Henry VIII and his infamous wives hold a certain fascination. Though I’m no history buff, the Tudor time period is of interest to me and seemed like a great idea for a YA novel.  Longshore did her homework with this novel and includes a lot of interesting historical detail. The dialogue also has a fresh modern spin that may appeal to reluctant historical readers. While I was listening to the book I have to admit curiosity got the better of me and I peeked online to find out more about how Catherine Howard’s story played out. And it did give me an appetite to read more about the subject and check out The Tudors.

Speaking of Cat Howard, not sure if the book is designed to make the reader hate her, but wow is she despicable. She doesn’t really have any redeeming qualities, and is catty and condescending throughout. Once she gets her clutches on Henry VIII she wants it all, including men closer to her own age, and will take down anyone in her path. But she is only a teenager when she marries the fifty-year-old King Henry so that does explain some of her behavior.  I was waiting for Kitty to get a clue about her frenemy Cat.

Now Kitty on the other hand, is loyal to Cat no matter what. She gets a taste for the royal life as Cat’s lady in waiting and is a partner in her schemes. I hoped she would wise up and get out of this mess. While serving Cat, she has her own complicated love life, and is torn between the sensible, no-drama William, and the dangerous Edmund. But she doesn’t really have time for either one because her friendship with Cat is all consuming.

Jennifer Ikeda is the narrator of Gilt and her performance enhances the story. When you listen to it it’s like Gossip Girl in the royal court, and Ikeda hits all the right notes in her reading. She flows effortlessly from one character to the next and all of them are easily distinguishable. Her British accent sounds natural to me and not overdone. Another nice touch is there is a snippet of string music at the beginning of the book and to introduce each new year in the story. Though I liked the story a lot on it’s own, Ikeda’s performance complements it well and I’m glad I got to experience it in this format. Towards the end I was doing extra household chores to get more listening in.

Gilt is a good read for those who enjoy historical fiction, or for YA’s learning about the Tudor court in their textbooks. The story brings the history alive and in an appealing way for today’s YA readers. Though the story gets lost in the details at times, it’s an addictive read and I’ll pick up the next book or audio. Speaking of which, Gilt is the first book in the Royal Circle series, and each book centers on a different girl in the court of Henry VIII.

YA Diversity Book Club: The Way We Bared Our Souls
Mailbox Monday (138)
Shift (Shade #2) by Jeri Smith-Ready
Dystopia at the Movies
Hot Deals for your Kindle