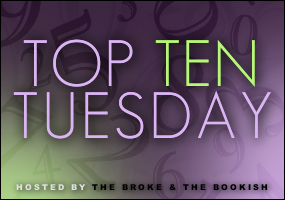 Top Ten Tuesday is an original feature from The Broke and the Bookish. This week is about listing books we want to catch up on in the New Year; bookish New Year’s resolutions I guess you could say. For whatever reason I haven’t had a chance to read these ten books yet, though I’m eager to remedy that in 2013! These books are already in my possession waiting to be read- listed in no particular order:

1. Looking for Alaska by John Green  – My daughter told me I need to read this before she goes back to school next week, so I’m on a deadline with this one! My copy was loaned out but I’ve replaced it with the box set so no more excuses.

2. Code Name Verity by Elizabeth Wein – I think I’ve been putting this off because it’s a little out of my comfort zone since I don’t read too many World War II books about pilots. However, it’s popular with bloggers I trust so I’m determined to give it a try.

3. Grave Mercy by R.L. LaFevers – I have this book in audiobook format, which will make it easier to fit in. Assassin nuns, romance and political intrigue- sounds very unique!

4. Days of Blood and Starlight by Laini Taylor – I’ve been waiting to read this sequel ever since I finished Daughter of Smoke and Bone, so I’m not sure why I’ve put off reading it. I kind of wish I had the audiobook instead of the print version, though I know I’ll enjoy this one once I start it.

5. The Crown of Embers by Rae Carson – Another highly anticipated sequel that everyone loves that’s hiding out on my kindle. It sounds even better than Girl of Fire and Thorns too.

6. Second Chance Summer by Morgan Matson – I overlooked this one for a while because I was not in the mood for a sad read, but it does sound like a lovely contemporary book.

7. Meant to Be by Lauren Morrill – This book looks like it’s right up my alley…romance and London, sweet and funny, what’s not to like? Why haven’t I read it yet? I’m noticing a lot of angst on my list so I’m glad this book is on the fluffy side.

8. Tell the Wolves I’m Home by Carol Rifka Brunt – I just got this for Christmas (thanks sis!) and the cover is gorgeous in person. It’s a coming of age story that takes place in 1987 and sounds heartbreaking and powerful and I’m looking forward to experiencing it.

9. Touching the Surface by Kimberly Sabatini – I really like afterlife stories and have had this book on my radar for a while now. It sounds like a tearjerker though which is why I think I’ve put it off.

10. Bittersweet by Sarah Ockler –I just picked this up in paperback and it looks like a great wintery read. There’s ice-skating, romance, family drama and cupcakes – sounds sweet to me!

Happy New Year, dear readers! What books do you resolve to read this year?