Today I’d like to welcome my husband Andrew to the blog and introduce a new feature called The Movie Date! In addition to reading, I’m also somewhat of a movie buff, and now and then plan to talk about the movies I’ve seen.  Andrew is also an avid movie watcher, and an entertainment writer as well, and I’m thrilled that he agreed to write the occasional movie review. This week’s movie date is Safety Not Guaranteed, directed by Colin Trevorrow. Please welcome Andrew to the blog! 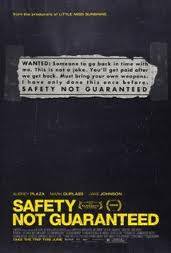 The origin of this witty and sweet-natured film is a simple one: a bizarre personal ad soliciting a companion for a time-travel experiment. The ad is real; I remembered reading about it a year or so ago, and turns out it actually ran in a magazine in 1997 and became a slowly growing internet meme. The ad, from which the film’s title is drawn, requests a daring partner who will supply his or her own weapons, and almost seems to tell a story of its own.

The buzz for the film was almost too good to be true: Sundance breakout, 3.5 stars from Ebert, unanimous praise from the critics. Promising indie hipster attitude, romance, sci-fi, humor, and great performances and directing, it could be classic, but it could also be a train wreck. And the warning is right there in the title. Happily, fears were unfounded and my YA blogger wife, YA reader daughter, and I all enjoyed it greatly.

Starts off strong by giving us instant sympathy for a great heroine, the twenty-ish Darius (Aubrey Plaza from Scott Pilgrim Vs. The World) who wants life to be exciting and longs to be appreciated. (The witty, dry role is perfect for Plaza’s trademark deadpan.) As an intern at a hip Seattle weekly, she’s tasked with uncovering the mystery ad’s author, and she, swaggering staff writer Jeff (Jake M. Johnson from TV’s New Girl) and a nebbish fellow intern hit the road for rustic Ocean View to stake out the ad’s PO box.

Kenneth, the mystery man (charming indie actor Mark Duplass) turns up and instantly dislikes Jeff, but finds a worthy partner in Darius, and the two of them set about planning their mission. The body of the film finds them cautiously learning to trust one another as they draw closer to their launch date—and to one another. A sort of relationship develops, of course, but it feels incredibly fresh and vital because these aren’t your standard character types—we’re never sure if Kenneth is a lunatic or a genius—and this isn’t a setting we’re used to. You don’t run from government agents, practice with firearms, and steal lasers in rural Washington every day.

In fact, about the highest praise I can give this fine and funny film is that it didn’t remind me of any film I’ve ever seen (and I’ve seen plenty). Rather than clashing, the various genres—romance, thriller, sci-fi, comedy—dovetailed brilliantly to create a unique and memorable tale. (In Darius’ absence, Jeff and the intern make a play for some local females, adding a nice balance to the story.) After watching the film, the three of us were surprised that we hadn’t heard more about this film, since it felt as satisfying and easygoing as a mainstream Hollywood comedy. I hope you’ll seek this little film out and give it a chance. Enjoyment is guaranteed, but as for safety… well, you’re on your own.

Safety Not Guaranteed is now playing in select cities – check the official site to see when it’s playing near you!

7 thoughts on “The Movie Date: Safety Not Guaranteed”