The Movie Date is a weekly feature where we discuss movies that may appeal to YA readers. Andrew is The Reading Date’s resident movie critic and this week he discusses The Book Thief, directed by Brian Percival, based on the book by Markus Zusak, and adapted by Michael Petroni. 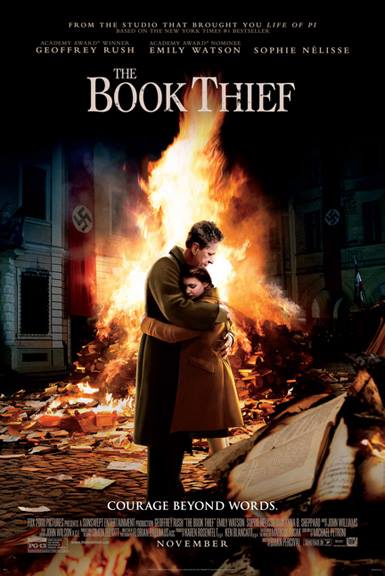 What was the first book you ever owned? You probably can’t say, but Liesel Memenger could tell you hers: it was The Gravedigger’s Handbook, retrieved from her brother’s burial site alongside the tracks that took her from her Soviet Union home to Molching, Germany. As a nine-year-old Communist refugee during World War II, she’s lucky to find loving parents in doting Hans Huberman (Geoffrey Rush) and stern Rosa (Emily Watson). But Liesel has no idea what her cherished book is about since she can’t read. “Papa” Hans gives his adoptive daughter the gift of literacy one gravedigging chapter at a time, and a lifelong love for books is born.

This is a warm and honest (and according to my daughter, pretty faithful) adaptation of a celebrated 2006 novel by Markus Zusak. It spans the years 1938-1945, and Liesel’s coming of age is mirrored by Germany’s own loss of innocence during that period. Like so many Germans of that time, her family tolerated Nazi rule but was less than thrilled by it. A book-burning rally on Hitler’s birthday makes Liesel realize that she’s actually an enemy of the state, given that she’s a Communist by birth and a book-lover as well. But she finds friendship and support from her “boy next door,” a plucky towhead named Rudy.

One day a young man named Max appears on the Huberman doorstep and promptly collapses. He’s a Jewish survivor of Stuttgart’s recent Kristallnacht sacking, and Liesel’s parents are obliged to give him shelter in their basement. After spending two years down there unable to see the outside world, he begs Liesel to describe the daylight to her—in her own words. She describes the overcast sun as a “pale oyster,” and Max is transported. As she reads novel after novel to him while he’s comatose, she starts to believe in the magical power of words. She pens her young memoirs in a journal Max provides, and we suspect she might make a decent living as an author someday.

The film’s opening narration tells us (I’m paraphrasing) that “everyone dies, no matter how we may try to postpone it. Sorry to be a spoiler.” We realize that this narrator is Death, and he pops up a couple times during the film, which struck me as unnecessary. But this is a wartime film and we do lose a few loved ones eventually; Death’s sympathetic words at the end of the film provide much-needed comfort and context.

The film is gentle and restrained; there’s little violence and barely a drop of blood seen, though we do view some corpses, and is thus appropriate for younger viewers (if you don’t mind answering some questions). Given its period setting and lack of major stars, it’s a hard film to market, and I hope this dignified saga finds its audience. Go out and give The Book Thief a shot; it may just steal your heart. 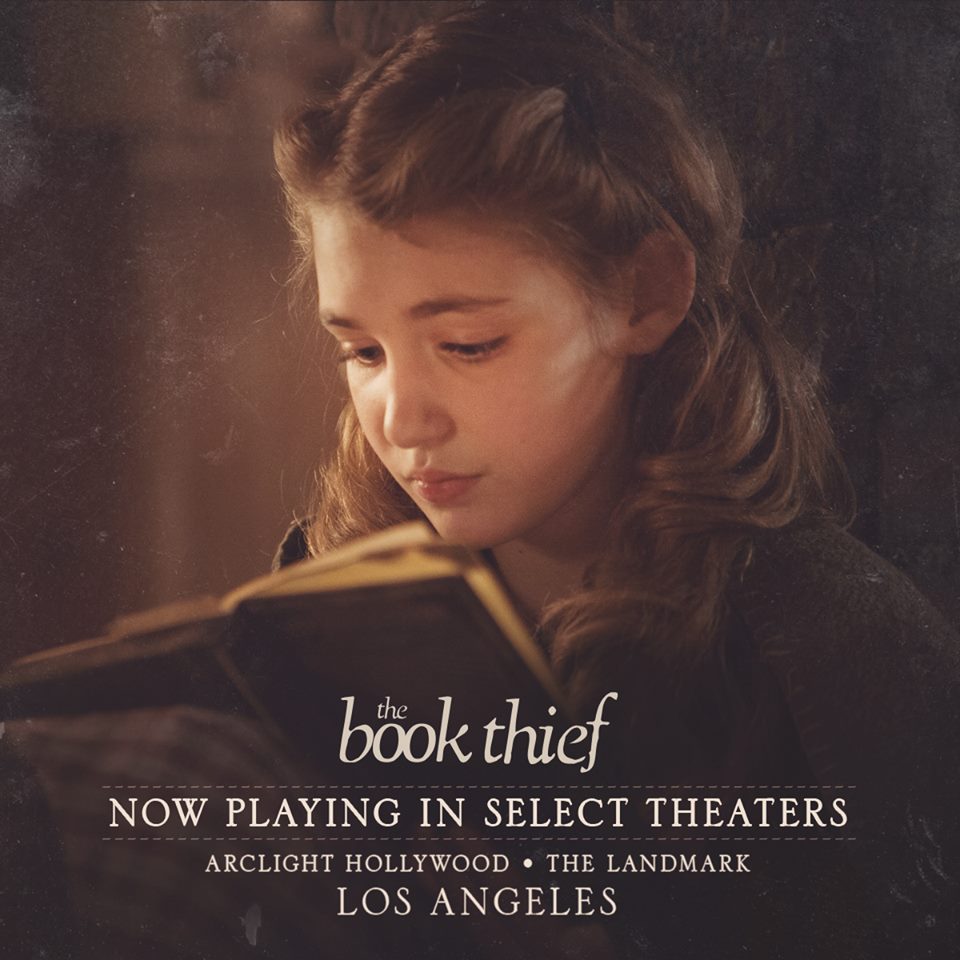 The Book Thief opened November 8 in 4 theaters in Los Angeles and New York, and will expand to more theaters soon. Check the official movie site to find out when it’s playing in your area. The Book Thief is  rated PG-13 and runs 131 minutes.

5 thoughts on “The Movie Date: The Book Thief”