The Movie Date is a weekly feature where we discuss movies that may appeal to YA readers. Andrew is The Reading Date’s resident movie critic and this week he discusses the Oscar nominated Beasts of the Southern Wild directed by Benh Zeitlin, and written by Lucy Alibar and Benh Zeitlin. 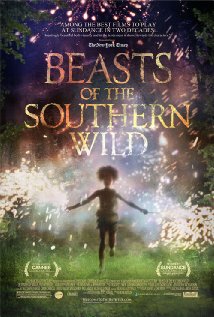 A six-year-old girl endures the flooding of her rural Louisiana home and the illness of her father, gaining courage from imaginary conversations with her missing mother.

After months in “long wait” status on my Netflix queue, this engrossing, uplifting post-Katrina film finally showed up on my doorstep. I was curious about it anyhow since I’m a fan of films that are glimpses into lives very different from my own, but the best-actress Oscar nomination of Quvenzhané Wallis (the Academy’s youngest-ever nominee in the category) made this a must-see.

I suppose you could call this an “early coming of age” story. More than most films about the lives of young people, this picture views its world strictly through the eyes of a child, never showing us events she doesn’t see nor explaining things that are beyond her comprehension. As she narrates the story, young Hushpuppy (Wallis) never tells us exactly where she lives, calling her flood-threatened area only “The Bathtub” (a classroom map informs us it’s an island off the coast of Louisiana). Her community lives completely off the grid, with neither money nor jobs, phones nor computers, in ramshackle homes that are sometimes indistinguishable from junk heaps. Wise Hushpuppy knows a storm will surely come that will put them at peril, but is more concerned about the aurochs (prehistoric cattle) that her teacher warned her used to eat children; in her mind’s eye we see them returning, crushing homes and looking for food…

The storm finally does come, leading the less committed residents to evacuate and the diehards to ride out the cataclysm. Undaunted, they move to higher ground (their roofs) and navigate the area in makeshift boats (such as a truck bed with an outboard motor). Through all this seeming disaster Hushpuppy must also deal with the failing health of her otherwise jovial father, now given to spells of weakness and fainting. She finds comfort in talking to her long-absent birth mother, who apparently just swam away one day and never came back…

Though based on a stage play (I can’t imagine how this story might have been staged exactly), the film’s most fascinating aspect is its anthropological insight, its glimpse into a fascinating, tenacious subculture. This is as much the story of The Bathtub’s proud survivors as it is Hushpuppy’s. To that end, she’s more of an observer than she is any kind of agent of change, and I missed the presence of a good strong protagonist making a difference to her world. Near the end of the film she embarks on a quest of sorts and returns with newfound strength, so her story is not without incident. And in fairness, this is more a tale about watching and learning rather than fighting off enemies anyhow.

It’s fascinating to see something like a devastating flood not regarded as any sort of tragedy, just nature taking its course, like the sun rising and setting. We could all do with a dose of Hushpuppy’s lack of self pity, and her raw wisdom that belies its youth.

Beasts of the Southern Wild is now available on home video and is rated PG-13. Running time: 93 minutes. This film is nominated for 4 Oscars including: Best Picture, Director, Best Actress, and Adapted Screenplay.

4 thoughts on “The Movie Date: Beasts of the Southern Wild”