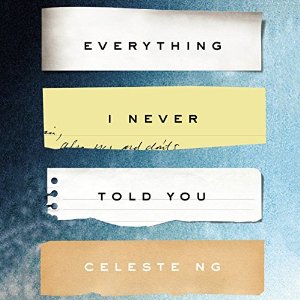 Lydia is dead. But they don't know this yet.…

So begins the story in this exquisite debut novel about a Chinese American family living in a small town in 1970s Ohio. Lydia is the favorite child of Marilyn and James Lee; their middle daughter, a girl who inherited her mother's bright blue eyes and her father's jet-black hair. Her parents are determined that Lydia will fulfill the dreams they were unable to pursue - in Marilyn's case that her daughter become a doctor rather than a homemaker, in James' case that Lydia be popular at school, a girl with a busy social life and the center of every party.

When Lydia's body is found in the local lake, the delicate balancing act that has been keeping the Lee family together tumbles into chaos, forcing them to confront the long-kept secrets that have been slowly pulling them apart. James, consumed by guilt, sets out on a reckless path that may destroy his marriage. Marilyn, devastated and vengeful, is determined to find a responsible party, no matter what the cost. Lydia's older brother, Nathan, is certain the neighborhood bad boy Jack is somehow involved. But it's the youngest of the family, Hannah, who observes far more than anyone realizes - and who may be the only one who knows the truth about what happened.

A profoundly moving story of family, history, and the meaning of home, Everything I Never Told You is both a gripping pause-resister and a sensitive family portrait, exploring the divisions between cultures and the rifts within a family and uncovering the ways in which mothers and daughters, fathers and sons, and husbands and wives struggle, all their lives, to understand one another.

When I was looking at a roundup of the 2014 “best of” lists, one book that kept popping up is Celeste Ng’s debut Everything I Never Told You. I ended up gifting a copy to my sister for Christmas, and my teen got a copy for Christmas as well. The universe was telling me to read it so I made it my first book of 2015. This book is a real page-turner (or in my case it kept my ears glued to my earbuds) and an intense, emotional listen about families, secrets, and race and gender roles.

Everything I Never Told You is set in Ohio in 1977, and as it starts off we find out 16-year-old Lydia Lee is missing. From the first line of the book we know it doesn’t end well; “Lydia is dead. But they don’t know this yet.” Lydia is the middle child in a Chinese-American family, and by all accounts the favorite. What led her to the lake that fateful night (she can’t swim) and was there foul play involved?

As the story plays out we get insight from each family member, painting a picture of Lydia’s life and what might have happened. Secrets abound in the Lee family, and as they reel from Lydia’s death their flimsy bond begins to unravel. Lydia’s older brother Nath suspects their neighbor Jack is somehow involved in Lydia’s death, and the youngest daughter is quietly observant behind the scenes.

James and Marilyn Lee put a lot of their lost hopes and dreams on Lydia. In Marilyn’s case, she wants Lydia to be a doctor, just like she had planned for herself. In James’ case, he wants Lydia to be outgoing and popular, not an outsider like himself. Lydia lives with the weight of this burden, trying to be what her family wants, while going through the motions at school. After Lydia’s death her parents discover they didn’t really know her at all- the pages of her diaries are blank and her supposed “friends” were not the close-knit group Lydia portrayed them to be.

Celeste Ng expertly sketches this family drama, weaving past and present to fill in the blanks of Lydia’s short life. I read this with my “parent” lens, feeling devastated for the Lee’s and hoping to not make any of the same mistakes. This absorbing thriller is a haunting and heavy one.

I listened to the audiobook, read by Cassandra Campbell. Campbell delivers a quiet and calm performance that fits the mood and lets the story shine through.

This is a good crossover book for YA fans. If you feel like a good cry and like introspective character driven novels give this one a try.

Thank you so much to the Goodreads/Ford Audiobook Club for the audiobook. Check out an audiobook sample:

3 thoughts on “Audiobook Review: Everything I Never Told You by Celeste Ng”