Noggin is John Corey Whaley’s (Where Things Come Back) new book. I knew I had to read this one after I heard the synopsis- Teen boy dies from leukemia and his head is detached and cryogenically frozen until a replacement body can be found. Travis wakes up five years later with a new athletic skater boy’s body and a telltale scar around his neck. In his mind, he was frozen in time, though in reality nothing is the same. This story is wacky, weird, wonderful and unforgettable. 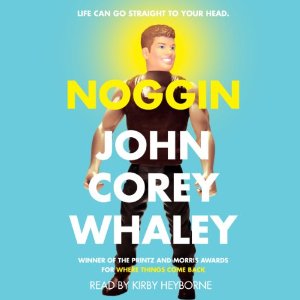 What’s Ahead:  Part sci-fi and part contemporary YA, Noggin feels fresh. Travis has to return to his old life when his friends (and girlfriend) have moved on. He feels stuck and frustrated and just wants the attention to die down so he can get back to his old life. It breaks your heart in the worst way to see Travis pine for his old girlfriend, and it makes you root for Travis to make peace with the present reality.

Travis is In Over his Head – It sucks to have to go back to high school when your friends have moved on to college and bigger and better things. Travis is the school novelty and everyone tries to get a glimpse of his scar under his scarf. One cool thing is that with his new body Travis is much more agile, and he’s very appealing to kids at school, though he only has eyes for one particular girl.

Don’t Change  – Travis fills the reader in on his life “before” and “after” and the book has a nostalgic feel to it. That is further punctuated by the 80s songs and vintage videogames like Space Invaders name-dropped throughout the book. Travis marvels over the latest fashion styles, technological advances, and social media as he learns to navigate this “future” world.

Soul Meets Body – There are some big life and death themes in Noggin. Travis has to deal with the fact that he basically came back from the dead, and come to terms with his new body, which he still refers to by the former occupants’ name. Survivor’s guilt is par for the course, and Travis hopes to find meaning in this second chance at life.

I’ll Be There For You – Travis doesn’t have to go it alone- he has his old best friend Kyle, his ex Cate, and his new school buddy Hatton. It’s hard though because Travis can’t have it the way it used to be, and his friends and family are torn between humoring Travis and wanting him to just move on. On the bright side, there is one person who understands exactly what Travis is going through. One other person had a successful reanimation and is a sounding board for Travis.

The Words Behind the Head – John Corey Whaley takes this out-there concept and makes it relatable and surprisingly moving. While the setup has sci-fi written all over it, the execution is more grounded in reality and I think readers will relate to Travis. A cool touch in the writing is that Whaley takes the last words in a chapter, and those become the titles for the next chapter.

The Voice Behind the Head– Kirby Heyborne (Gone Girl, Scowler, Jim Henson bio, Hollow City) performs the audiobook, and I’m a fan so it was a no-brainer to listen to this one.  Heyborne makes Travis’ sound age and character appropriate. He makes Travis sound melancholy, excited or angry as the occasion arises. You can feel his connection to the material and his performance is steady throughout.  He makes all the voices sound unique, and helps the listener get inside Travis’ headspace.

Check out a sample of Kirby Heyborne’s performance:

I was talking about this book on Twitter for #fridaylistens and Kirby Heyborne chimed in on his experience recording the book:

@readingdate haha! I loved that book. Between you & me (& the internet) it was hard to hold back tears. @corey_whaley @SimonAudio

If We Were a Movie: Summit Entertainment landed the film rights to Noggin! Read about it on Deadline here.

Head Games: The author keeps the tone of the book light by having some fun with the premise, and making “head puns.” That inspired me to put together a playlist of songs about heads. Travis famously sings Tears for Fears’ Head over Heels at a karaoke bar so of course that made the cut:

If you want to see the author’s actual playlist be sure to check it out here: http://novelnovice.com/2014/04/11/noggin-by-john-corey-whaley-official-playlist/

Move Ahead with Noggin if you like – Quirky, smart, emotional, contemporary reads that are off the beaten path. This would also be an excellent choice for readers looking to read more diverse books (there is a glbt character.)

Congrats to Mandee who won the Noggin audiobook!