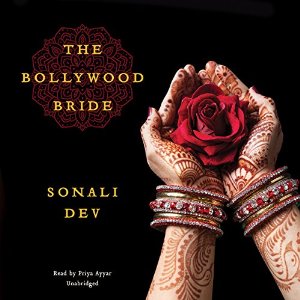 Also by this author: A Bollywood Affair

Ria Parkar is Bollywood's favorite ice princess - beautiful, poised, and scandal-proof - until one impulsive act threatens to expose her destructive past.

Traveling home to Chicago for her cousin's wedding offers a chance to defuse the coming media storm and find solace in family, food, and outsized celebrations that are like one of her vibrant movies come to life. But it also means confronting Vikram Jathar. Ria and Vikram spent childhood summers together, a world away from Ria's exclusive boarding school in Mumbai. Their friendship grew seamlessly into love - until Ria made a shattering decision. As far as Vikram is concerned, Ria sold her soul for stardom, and it's taken him years to rebuild his life. But beneath his pent-up anger, their bond remains unchanged. And now, among those who know her best, Ria may find the courage to face the secrets she's been guarding for everyone else's benefit - and a chance to stop acting and start living.

Rich with details of modern Indian American life, here is a warm, sexy, and witty story of love, family, and the difficult choices that arise in the name of both.

In The Bollywood Bride, Ria Parkar left her family skeletons and her true love Vikram behind to become a Bollywood star. It’s ten years later and a wedding invitation from her cousin Nikhil has her returning home to Chicago for the first time. Is it time for Bollywood’s favorite Ice Queen to face her demons once and for all?

I loved Sonali Dev’s first book A Bollywood Affair and was so excited to hear she was writing a second book. The Bollywood Bride is not a continuation of the first story, and can absolutely be read as a standalone. (I did appreciate a cameo from someone in the first book though!) There is a new cast of characters and a heavier tone. This book tackles mental illness and the cultural stigma that goes with it. Our heroine is carrying quite a burden on her shoulders and can’t seem to let anyone in.

The backdrop of Ria’s story features plenty of culture, family scenes, food, pretty clothes, and, of course, a big wedding – and these scenes balance out the dark tone of the book. Ria’s hovering aunties and the wedding prep were some of my favorite parts of the book.

Though this book is about Ria’s personal struggles, there is also a second chance romance on the table. It’s been ten years since Ria broke Vikram’s heart. And when she finally sees him again she can see that he’s moved on without her. Vikram is a jerk to Ria at first and obviously holds a grudge. Ria never told Vikram the truth about why she couldn’t stay with him but her feelings for him never dimmed. Seeing him again brings all the old feelings back to the surface, but it’s obvious these two have their work cut out for them. The author made Vikram’s girlfriend so sweet it made me want her to get her own HEA, though not with Vikram of course. (Maybe she’ll get her own book someday!)

Priya Ayyar narrated the first book in the Bollywood series and she’s back again for The Bollywood Bride. Ayyar has a clear, sweet voice and does an incredible job differentiating the voices of the large cast of characters. The tone of the story switches from joyful, angsty, romantic, and melancholy and Ayyar keeps up with ease. This is an entertaining audiobook that brings the Bollywood theme to life. And this has nothing to do with the audiobook production- but doesn’t the audiobook cover remind you of Twilight? Maybe S. Meyer’s next Twilight update should be a Bollywood version!

The culture, setting, family, and romance made this an unforgettable read, and the heroine’s personal struggles added depth to the story. I look forward to Sonali Dev’s next Bollywood installment.

2 thoughts on “Audiobook Review: The Bollywood Bride by Sonali Dev”