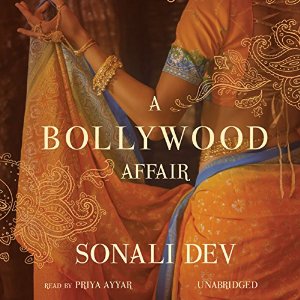 In the tradition of Shobhan Bantwal's successful Indian American novels, Sonali Dev's debut captures the colorful spirit and fascinating details of Indian and Bollywood culture - including a lavish wedding - while delivering an emotionally layered and accessible story.

Mili Rathod has been bound by marriage since she was four years old. But when her husband shows no sign of claiming her after 20 years of waiting, Mili grabs the chance to leave India and come to America on a scholarship.

Playboy filmmaker Samir "Sam" Rathod is Bollywood's favorite bad boy. He'll do anything for his big brother - even travel halfway across the globe to take care of the "wife" who just crawled out of his brother's past. Yet Mili isn't the simple village girl Sam expected. She's a whirlwind who sucks him into her roommate's elaborate elopement and soon has him drowning in her onyx eyes. And though Mili fancies herself in love with his big brother, the husband she has never met, Sam is hoping for a very different ending.

In A Bollywood Affair a bad boy Bollywood director and an innocent girl who’s “married” to his brother fall for each other. This engaging debut has a sweet forbidden love story, cultural flavor, and intriguing personal stories and characters. Bring on the Bollywood movie- I want to see it on the big screen!

I picked up A Bollywood Affair from the library after coming across some favorable reviews. I’m interested in Indian culture and Bollywood movies, and was thrilled to see a romance set in this world. This book immediately drew me in and had me rooting for Mili and Samir’s love story.

Mili and Virat were “married” when she was four and he was twelve. It’s twenty years later and Mili is still waiting for her husband to come for her. She gets a scholarship to attend school in the US, telling her grandmother it will make her more modern and alluring for her husband.

Virat thought the marriage was long annulled, and he’s now married to someone else and with a kid on the way. He needs his marriage to Mili to go away, and his younger brother Samir is happy to help. He’ll soon have this “gold-digger” eating out of his hands. Fate has other plans.

My heart went out to sweet Mili. She wants to live her life but honors her commitment to this absent husband. She is torn between her grandmother’s traditional ideas and other modern opportunities. Samir crashes into her life and doesn’t fit into her plans but he’s impossible to ignore.

Samir is the hotshot playboy director who has one simple errand. But Mili brings out something in him and soon the mission gets muddled. Samir and Mili aren’t completely open with each other and eventually the secrets come to a head.

I listened to the audiobook, read by Priya Ayyar. Ayyar does a great job with the narration and is especially successful with conveying Mili’s wide-eyed innocence. She makes you feel like you are there with the characters and made it easy for me to visualize the events and settings. Since this story is as much Samir’s as it is Mili’s it would have been nice if there were a male narrator added though Ayyar still did a decent job with the male voices. The time flew by as I was listening to this one. Take a listen:

Sonali Dev is a new romance author to watch. I liked how the tone was light and romantic, though she also included some social commentary to give the story some depth. I read on the author’s blog that there will be more books in the Bollywood series- can’t wait to read more from this author!

2 thoughts on “Audiobook Review: A Bollywood Affair by Sonali Dev”