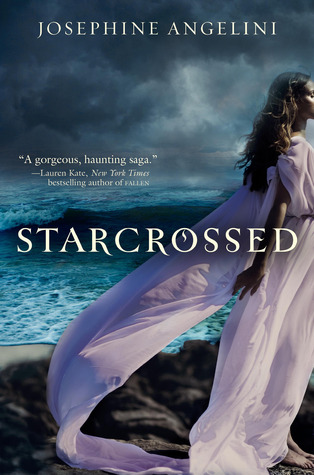 Series: Book 1 of the Starcrossed trilogy

How do you defy destiny?

Helen Hamilton has spent her entire sixteen years trying to hide how different she is—no easy task on an island as small and sheltered as Nantucket. And it’s getting harder. Nightmares of a desperate desert journey have Helen waking parched, only to find her sheets damaged by dirt and dust. At school she’s haunted by hallucinations of three women weeping tears of blood . . . and when Helen first crosses paths with Lucas Delos, she has no way of knowing they’re destined to play the leading roles in a tragedy the Fates insist on repeating throughout history.

As Helen unlocks the secrets of her ancestry, she realizes that some myths are more than just legend. But even demigod powers might not be enough to defy the forces that are both drawing her and Lucas together—and trying to tear them apart.

I have a passing interest in Greek mythology, though I’m not too well versed in the subject. The recent mythology trend in YA books has caught my interest, and the buzzed about Starcrossed seemed like a good place to start. I know just enough to be interested in the subject but not so much that the plot was predictable. Starcrossed got off to a slow start for me but held my interest once we got to the heart of the story. The unexpected twists and complex story made for an entertaining read and should appeal especially to mythology enthusiasts.

Helen has a monotonous life and has always felt out of place, and her physical appearance and abilities on the track team make it hard to fly under the radar. Once the Delos clan comes to town her world is turned upside down. And when Helen meets Lucas she goes into full on attack mode much to her surprise. She has no knowledge of the centuries old feud that has been brewing between their families but she feels compelled to try to kill him anyway. Slowly the truth is revealed to Helen and the pieces of the puzzle begin to come together.

Their complicated family history makes for an intriguing romance between Helen and Lucas, who find they are drawn together despite their differences. Helen eventually realizes she’s falling for him and decides not to kill him after all. Lucas brings out the best in Helen and helps her confidence to grow as she learns more about her powers and history. Their chemistry together is one of the strengths of the book.

The Delos clan is a group with special abilities, similar to other gifted families found in paranormal books. It’s a large family, and this group helps Helen feel a sense of belonging. I like these family situations in books and enjoyed the drama, history and education they provided. There is a large cast of characters though so sometimes I found it hard to keep track of everyone. They also lost me a bit with the mythology parts.

The ending of Starcrossed was full of suspense and surprise that left me hanging. The book ends abruptly with many loose ends, and at first I thought I was missing part of the audiobook. Ultimately, the story is complicated and interesting, but I wished for more closure in the first book. The book could have been tightened up a bit to get to the meat of the story faster. Readers up on their Greek Mythology will probably find Starcrossed enticing, but you may want to wait to read it until the second book is out to get more closure.

The narrator for the audiobook is Devon Sorvari, and she fit the character of Helen very well. She played up her insecurity and vulnerability perfectly in the first part, and gradually changes into a more confident voice. She capably handled the voices of the many characters without any distracting characteristics. She is a pleasant reader to listen to for fourteen hours and seems well suited for this series.

The sequel to Starcrossed is called Dreamless and it is expected to hit shelves in May 2012.

Deals for your Kindle (7)