Today I’m so pleased to welcome author Bradley Somer who is here to chat about his new novel Fishbowl. This quirky, memorable read gives us a glimpse into the lives of several inhabitants of an apartment building, seen through the eyes of an intrepid goldfish. Doesn’t that sound fun? Please welcome author Bradley Somer who’s here to tell us more about it:

Congrats on the release of your latest novel, Fishbowl! The publisher’s description really catches reader’s attention. Briefly describe what the books about and tell us how you came up with this clever idea.

Thanks! It was a blast to write. Fishbowl is the story of the residents of the Seville on Roxy and an adventurous goldfish named Ian. The novel takes place over half an hour and the whole idea was to examine, through the characters, how we all impact each other’s lives. If you take all the major life events (like falling in or out of love, birth and death, and so on) of a group of people (say, in an apartment building), a collective life is lived among them in the blink of an eye. The idea for the novel grew from an apartment I was in. It was vacant and there was an empty fishbowl on a table out on the balcony. There was a story in that alone but, with the subtle noises of all the life happening in and around the building, that original image eventually grew into Fishbowl.

I can see how finding that empty fishbowl in a new apartment would be inspiring to a writer. You have a written a lot of short fiction in the past. What made you decide to write novels and which do you think is harder to write?

I’ve always written and the form of it, short fiction versus novels, doesn’t matter to me as long as it’s sufficient to tell the story I want to. Both long and short form fiction have their perks and challenges. I wouldn’t say one is harder than the other, just different. In short fiction, you’re limited in the amount you can show about a theme or a character but that focus also gives you the opportunity to pack quite a punch if you choose your words well. Novels are wonderful because you can delve deeper and broader into the story. The drawback is that it can be quite a marathon to work with the same characters and thematic points for such a long time.

That makes sense, and I do hear some authors are reluctant to write series books for that reason as well. In Fishbowl the narrative shifts from the POV of Ian the goldfish to the various residents of the Seville on Roxy. Who was your favorite character to write? Favorite scene or line?

This is a great question. Chatting with many people who have read the book, it’s interesting to see who identifies with whom. I got to know all of the characters so well it’s hard to choose. If pressed, I would say Herman would be near the top of my list. I feel he’s such a sad and hopeful character that I couldn’t help but root for him. Petunia Delilah would be up there too because she has one of the more immediate storylines to deal with and she’s such a spunky mom-to-be. My favourite line comes near the end of the book, how we don’t live our own life, we live each other’s together.

I have a soft spot for Herman as well. I love the whimsical goldfish drawing that appears on the books pages. You can flip through and follow his descent. Was that a design detail you had in mind when you were writing the book?

That detail, and the gorgeous inlay on the hardcover, were the brainchildren of the wonderful folks at St. Martin’s Press. They were fantastic to work with and brought so much energy and enthusiasm to the table through each stage of its production.

What books have influenced your life the most, and what books are you reading now?

I rarely re-read books because I reckon there are so many good ones I haven’t read yet. So, I’ll answer by telling you the books I re-read. Two that I constantly revisit are “The Five Gates of Hell” by Rupert Thomson and “The Geek” by Craig Nova. No matter how many times I pick them up, I always settle in for a good read and find something new in the pages. Right now I’m reading George Martin’s “The Dance With Dragons.” I have to finish it before I watch the show!

Thanks for the book recs. I haven’t started reading or watching Game of Thrones so you’re ahead of me there. Can you give us a little hint about what you’re writing now?

I completed another novel earlier this year. It’s currently taking a breather until I get the mind to finish editing it. And I’m about half way through another novel, which may or may not have a bit of a cheeky affair between a photon and a pomegranate.

Way to leave us hanging! Keep writing- I can’t wait to hear more. Thanks so much for stopping by, Bradley!

BRADLEY SOMER was born in Sydney, Australia and grew up in Canada and holds degrees in Anthropology and Archaeology. His short fiction has appeared in literary journals, reviews and anthologies. His debut novel, Imperfections, published in Canada, won the 2013 CBC Bookie Award for debut of the year. Bradley currently lives in a little old house in the city of Calgary, Canada, where he works on his writing projects and tries to ignore the wild growth that his backyard has become. 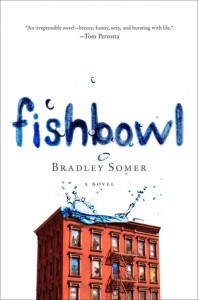 A goldfish named Ian is falling from the 27th-floor balcony on which his fishbowl sits. He’s longed for adventure, so when the opportunity arises, he escapes from his bowl, clears the balcony railing and finds himself airborne. Plummeting toward the street below, Ian witnesses the lives of the Seville on Roxy residents.

There’s the handsome grad student, his girlfriend, and his mistress; the construction worker who feels trapped by a secret; the building’s super who feels invisible and alone; the pregnant woman on bed rest who craves a forbidden ice cream sandwich; the shut-in for whom dirty talk, and quiche, are a way of life; and home-schooled Herman, a boy who thinks he can travel through time. Though they share time and space, they have something even more important in common: each faces a decision that will affect the course of their lives. Within the walls of the Seville are stories of love, new life, and death, of facing the ugly truth of who one has been and the beautiful truth of who one can become.

Sometimes taking a risk is the only way to move forward with our lives. As Ian the goldfish knows, “An entire life devoted to a fishbowl will make one die an old fish with not one adventure had.”

One thought on “Q&A: Author Bradley Somer on FISHBOWL”