Sure Signs of Crazy is Karen Harrington’s Middle Grade debut. It tells the story of 12-year-old Sarah Nelson who lives with her dad, loves words and classic books, and confides in a plant. She doesn’t know her mom, but does know that she tried to drown her (and did drown her twin brother) when she was two. Sarah worries that she’s going to turn out like her mom, and looks for any signs of unbalanced behavior. One summer she decides to confront her fear head on with an investigation that leads to a first crush, King Ranch casserole, and letters to Atticus Finch. This story sounds heavy but there is a sweetness and quirkiness to it that lightens the load. 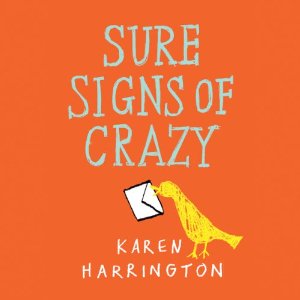 After I listened to this book I found out that the author released Sarah’s mother’s story first in a book called Janeology. I’m now so interested to read this book to get the whole backstory. I like this kind of middle grade book that deals with serious issues, and would have loved it as a kid.

Sarah is having a rough time of it. Her dad’s an alcoholic, she is dealing with “trouble” words like crazy, and her non-relationship with her “celebrity” mom is weighing on her. Her summer assignment is to write to a character, and Sarah chooses Atticus Finch from To Kill a Mockingbird, since she’s so taken with the book.

Sarah spends time with a group of older teens that watch over her while her dad’s at work. Charlotte is 20 and schools Sarah on cooking, boys, and feminine hygiene. And Charlotte’s brother Finn also loves words like Sarah and becomes a friend to her.

Sarah’s mom is infamous, so Sarah has that celebrity culture to deal with as well as her own complicated feelings about her. Alcoholism is another shadow that hangs over the book, as Sarah needs her dad to be there for her and it’s sometimes hard for him to be.

Karen Harrington handles these issues with sensitivity and doesn’t talk down to her readers. There are some heavy moments but for the most part the tone is not too sad. This coming of age is relatable even though Sarah’s experience is pretty unique.

I listened to the audiobook, performed by Cassandra Morris. With her youthful tone she is the perfect person to read this book, and is believable as the voice of twelve-year-old Sarah. She gets to stretch her voice muscles by portraying a variety of characters, bringing the cast to life. This is my favorite performance to date for Morris, and I wouldn’t hesitate to listen to more MG books from her.

Read Sure Signs of Crazy if you like – Middle Grade books, words and literary references,  books about family drama and mental illness, and precocious female characters.