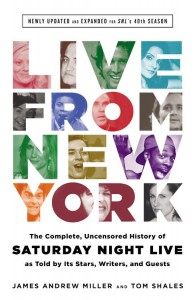 Just in time for the 40th anniversary of Saturday Night Live, a rollickingly updated edition of LIVE FROM NEW YORK with nearly 100 new pages covering the past decade.When first published to celebrate the 30th anniversary of Saturday Night Live, LIVE FROM NEW YORK was immediately proclaimed the best book ever produced on the landmark and legendary late-night show. In their own words, unfiltered and uncensored, a dazzling galaxy of trail-blazing talents recalled three turbulent decades of on-camera antics and off-camera escapades. Now a fourth decade has passed---and bestselling authors James Andrew Miller and Tom Shales have returned to Studio 8H. Over more than 100 pages of new material, they raucously and revealingly take the SNL story up to the present, adding a constellation of iconic new stars, surprises, and controversies.

As a longtime Saturday Night Live fan, I read Live From New York when it first came out in 2002. At the time, the book was the definitive book SNL. The book’s authors got pretty much everyone to talk, including the cast and crew and Lorne Michaels himself. This oral history is an entertaining read for fans of SNL to find out what really goes into making the show. This 2014-updated version of the book takes the story up to date through the 39th season of SNL. The 40th season of SNL premieres tonight with host Chris Pratt.

I always tried to stay up late and watch SNL as a kid in California, and then got a kick of getting to watch the show “live” when I lived in New York. OK, I never went to see it live but I liked that it was happening theoretically a subway ride away. I still keep up with the show, even if I now DVR it and skip through post-Update sketches. Some seasons are better than others, but I always like to see what they do with current events and get their take on political happenings.

I’ve read that Live from New York is like an employee handbook for new cast members of the show to learn what to expect. But, based on the cast recollections from the 70s to the current season, things have changed a lot. It doesn’t seem to be a party scene so much anymore, with cast members more health conscious and concerned with getting enough sleep so that they look well-rested on camera.

When I read Tina Fey’s Bossypants I enjoyed reading her recollections of her time on SNL, including her friendship with Amy Poehler and her time as head writer. Tina Fey had left SNL to do 30 Rock when she was asked back to parody Sarah Palin. This book includes Tina’s reactions to the phenomenon as well as Sarah Palin’s. The cast members theorize the impact Tina Fey had on the election.

With Andy Samberg’s arrival at SNL, the show embraced the digital age with their Digital Shorts. These clips introduced the show to a new generation and I know that was the case for my own kid and their friends. (We still quote “Threw it On the Ground” to this day) This book talks to the “Lonely Island” group that created the iconic clips.

Speaking of the digital age, this latest group of cast members relies on getting instant feedback on their work on YouTube or Twitter, something obviously not there in the 80s. Some cast members have a hard time with viewer feedback while others thrive on it.

Several more iconic cast members like Bill Hader, Fred Armisen, and Kate McKinnon are included in this update. It was interesting to learn that Bill Hader wasn’t really known as an impressionist before SNL, but learned he can really handle any voice. And he also talks about his character Stefon and how he beat himself up when he “broke” during the show. I wish he was still on the show truthfully.

The book also includes last season’s callout about the lack of diversity in the cast. Jay Pharoah and Kenan Thompson were outspoken about the lack of women of color in the cast, prompting the hiring of Sasheer Zamata. Kerry Washington, a host during this time, also speaks about the issue.

Cast members talk about the pressure of writing and being on the show, when it’s time to leave, and what happens next. For a lot of the cast, being on the show means you’ve made it, but there’s also a lot of pressure to live up to in your post-SNL life.

Live from New York is a fascinating read, and a must-read for fans of the show. I’m happy that the writers came back with an update. It’s a huge book, but a really fast read. You can kind of pick it up and turn to any page and get lost in the story.

Do you still watch SNL? Who is your favorite cast member?