Julie Anne Peters has been writing Gay YA for over a decade, and her latest book, Lies My Girlfriend Told Me, is also her last. LIES is about the unearthing of a tangle of lies left behind after a girlfriend’s untimely death. It has romance, friendship drama, cheerleaders, baby brothers, and mystery. What can I say- I was entertained! 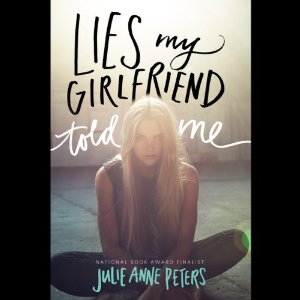 In LIES, Alix’s life revolved around the magnetic Swanee. She’s devastated to find clues to a secret romance on Swanee’s cell phone. Should she A) Use Swanee’s phone and pretend to be Swanee to fess out the situation with this other girl or B) Stay out of it and let Swanee rest in peace. I think you can guess which door Alix chooses in this scenario.

Swanee was one of those girls that could charm her way out of anything. Her little sister worshiped her, her parents spoiled her, and she was the center of the universe at school. She was the star of the track team and it was a total shock when she collapsed on the field of sudden cardiac arrest. Alix gave up everything to be with her because Swanee commanded her full attention. Finding out that Alix left behind this double life was devastating to her.

The cell phone trail leads to Liana, who is just as big a victim as Alix. They soon become unlikely friends, even though their new alliance is built on a lie. Is this budding romance a rebound as Alix’s dad suspects, or the real thing?

Swanee is painted as the villain in this book, and I wished we could have had her side of the story. Because as it stands it’s hard to see how Liana and Alix were so blindly in love with her. There are many examples in the book where she is portrayed as cold and calculating, though she obviously had both girls under her spell.

One of the side stories is about Swanee’s little sister Joss, who acts out after Swanee’s death. This story is kind of left hanging and I wanted a little more resolution there. And there’s also a look at two very different parenting styles – Alix’s helicopter parents and Swanee & Joss’s parents’ live and let live motto.

The romance between Liana and Alix is sweet and the pair has chemistry. Though considering the traumatic experience they’ve had I would rather see them keep things casual for a while. But their need for monogamy probably has a lot to do with Swanee’s deception.

This is my first experience with Julie Anne Peters’ writing, and I think she has a good pulse on YA’s- the dialogue and behavior read as authentic to me. This story had a lot going on for a shorter book and it kept my earbuds glued to my ears.

I listened to the LIES audiobook, read by Christine Lakin (The Coldest Girl in Coldtown, Parasite.) The production is crisp and clear, and Lakin’s voice is natural and effective. Her style reminds me of narrator Emma Galvin (Divergent), and she’s a good storyteller who doesn’t overdo it with her performance- she lets the story shine. Her voice for Alix is matter of fact and suits the character, while her voice for Liana is sweet and bubbly, just how I’d imagine her. I’d select more audiobooks solely based on Lakin as the narrator. Her voice is pleasant to listen to.

Check out an audiobook sample of Lies My Girlfriend Told Me:

Author Julie Anne Peters announced that this is her last book – she’s retiring to focus on children’s literacy and tutoring kids to read at their grade level. Luckily I still have her back catalog to catch up on. Check out this book if you like romance, contemporary YA, and LGBT books that are not coming out stories.