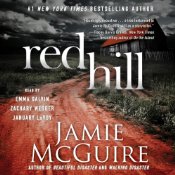 Red Hill is a new zombie fiction book from one of the biggest names in New Adult, Jamie McGuire. McGuire is known for the NA romance Beautiful Disaster, so a zombie apocalypse book is quite a departure. Readers of this blog know I prefer realistic stories, but hey it’s almost Halloween, so bring on the zombies!

Red Hill takes place at the beginning of a zombie apocalypse and has three different points of view:

Scarlet is a divorced mom of two girls. She shares custody, and her husband has the girls when disaster strikes. Scarlet will stop at nothing to get her girls back.

Nathan is unhappily married/separated and has a young daughter named Zoe. His goal is to keep his daughter safe.

Miranda is college-aged and traveling with her sister Ashley and their boyfriends Bryce and Cooper when the zombies arrive.

The trio and their entourage come together at Red Hill ranch for shelter and support, and try to keep the zombies at bay. Tensions run high, but romance also provides a distraction for the survivors.

Red Hill is more of a character study than a non-stop zombie killing adventure. Scarlet’s character is at the center of the action- she’s the mother figure to the group, and also one of the best at taking down zombies, aka creepers/shufflers/teds. She holds on to the hope that she will be with her daughters again and that’s what keeps her going.

The story picked up steam for me once the gang got together at Red Hill. Before that time, they were isolated and dodging zombies separately, and my mind would start to wander. There’s lots of time spent on the journey to Red Hill. And with the shift in perspectives, I felt a little detached from the characters.

When the group meets up at Red Hill though, things get a little less predictable and a lot more dangerous. Character bonds are formed. The danger kind of sneaks up on you, and there are some whoa, I can’t believe this is happening moments. The slow pace of the novel makes any fight or death scene that much more impactful. And McGuire makes some bold choices with the conclusion that took me off guard.

I picked up the audiobook because I saw Emma Galvin was one of the narrators. Galvin reads Miranda’s part, January LaVoy is Scarlet, and of course Zachary Webber is Nathan. Galvin is very strong with action scenes and bringing the emotional intensity to her reading- she reads Divergent so this is right up her alley. LaVoy sounds age-appropriate for Scarlet, and you can feel her concern for her kids. Webber’s Nathan has a smooth, calm voice that’s perfect for the character. The narration is good, and sets the mood for the story. Emma Galvin’s intensity stands out among the trio but that’s also the nature of her character. The novel’s slow pace did make the audiobook feel longer than 9.5 hours.

Red Hill is zombie fiction, rather than NA or YA and is such a departure for Jamie McGuire I’m not sure it’s a natural fit for her NA/romance fans. Then again, with the focus not on zombie killing action, it’s not a slam-dunk for zombie lovers either.  I’m not into zombies, but even I think there should have been more action and scares.

Red Hill may be a good choice for someone who reads fiction and wants to dip their toes in the zombie pool. There’s not too much romance and it’s not keep-you-up-at-night scary. It has a Walking Dead vibe to it, and you’ll be thinking more about how you’d survive in a zombie apocalypse.

Take a listen to an audio sample: