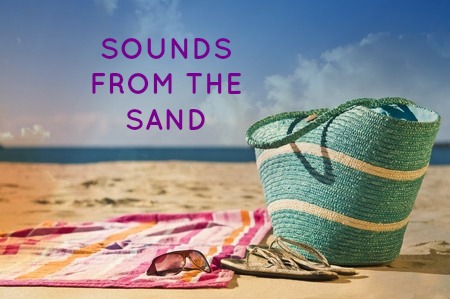 Top Ten Tuesday is an original feature from The Broke and the Bookish. This week we’re counting down our Top Ten Beach Reads. Since June is audiobook month, I’ll be taking audiobooks to the beach.

Close your eyes and listen to these books on the beach:

The Good Girl by Mary Kubica, read by Lindy Nettleton, Johnny Heller, Tom Taylorson, and Andi Arndt –Blackstone Audio, July 29. I like a good thriller in the summer a la Gone Girl or Reconstructing Amy, and this sounds like another twisty tale about a missing woman. Full cast audio too!

California by Edan Lepucki, read by Emma Galvin – Hachette Audio, July 8 – In a  post-apocalyptic Los Angeles a couple flees for the woods and find themselves expecting a baby and search for safer (?)living conditions. And hello, Emma Galvin!

The Girl with All the Gifts by M.R. Carey, read by Finty Williams – Hachette Audio, June 10. This post-apocalyptic thriller is getting rave reviews. The blurb is a little cagey and only mentions it’s about a special girl named Melanie who is locked up except to go to school. Don’t read too much about it so you’ll be surprised! The audio is supposed to be excellent.

Landline by Rainbow Rowell, read by Rebecca Lowman – Macmillan Audio, July 8. A new crossover fiction title from Rowell, and this one is about a failing marriage that uses a sort of time travel device to make things right. Plus, Rainbow Rowell and Rebecca Lowman go together like peanut butter and jelly.

The Lemon Grove by Helen Walsh, read by Kate Reading – Blackstone Audio, June 3. This book is about a May-December forbidden relationship. The Mallorca island setting is a perfect accompaniment to your beach adventures.

The Chance You Won’t Return by Annie Cardi, read by Jessica Lauren Ball – Candlewick on Brilliance Audio, on sale now. A girl is overwhelmed by many things in her life, including her mother’s obsession with Amelia Earhart. Lots of good buzz about this one!

The Fever by Megan Abbott, read by Caitlin Davies, Kirby Heyborne, Joe Barrett – Hachette Audio, June 17. I love listening to a good mystery, and The Fever is high on my audio wish list. It deals with a mysterious illness and Mean Girls style drama.

We Are Called to Rise by Laura McBride, read by Cassandra Campbell, Kirby Heyborne, Madeleine Maby, Pete Simonelli – Simon & Schuster Audio, June 3. EW gives this book an A- grade and it’s about four ordinary characters that live in Las Vegas. Full cast audio too that features many of my favorites!

Big Little Lies by Liane Moriarty, read by Caroline Lee – Penguin Audio, July 29. I liked The Husband’s Secret (same narrator) so much and hope this is another winner. Big Little Lies is about a murder investigation in a suburban town and is centered on three women dealing with marriage, parenting and school drama.

The Things You Kiss Goodbye by Leslie Connor, read by Lauren Fortgang – Harper Audio, June 24. A girl in an abusive relationship falls for a nice guy who is forbidden to her. Something tells me this book will be a tearjerker. I’m sure Lauren Fortgang is up for the challenge.

What books will you be bringing to the beach?