I am such a big fan of Matthew Quick’s books, from Silver Linings Playbook to Forgive Me, Leonard Peacock. He’s so skilled with his storytelling, and especially with regards to his emotionally unstable characters. I’ve listened to all his books, and now finally Boy21 is an audiobook! Boy21 is a compelling story about the friendship between Finley, Russ and Erin. Basketball, tragedy, Harry Potter (and outer space!) brings Finley and Russ (aka Boy21) together as they support each other through some tough times. 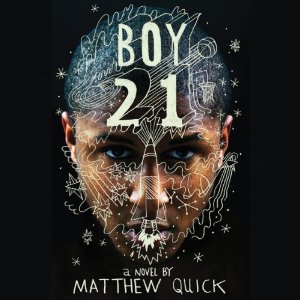 Check out the awesome book trailer!

Finley (dubbed White Rabbit) is a high school senior and basketball player. He lives in a tough neighborhood and takes care of his disabled grandfather while his father’s at work. His girlfriend Erin also loves basketball and they hope that it’s their ticket out of town after graduation. Star basketball player Russ moves to town when tragedy strikes his family. Coach asks Finley to befriend Russ in the hopes that he will join their team and save the season. This is a sticky situation for Finley because Russ not only plays his same position, but also wears #21. But maybe the worry is all for nothing; PTSD-stricken Russ (call him Boy21) is more focused on outer space than basketball.

The bond between Finley and Russ is really special. Finley is used to being teased for being so quiet, but Russ appreciates his quiet nature, and Finley becomes a lifeline for him. Plus, Russ’ arrival is the catalyst for Finley to deal with his own demons. There is a cute Harry Potter tie-in to this friendship that strikes the perfect note.

I found myself caring so much about Finley, Russ and Erin. There was a lot of tension in the air from all the violence in the community that I was on edge with worry. Basketball is an escape for many but there are some dangerous forces in this drug-addled mob-infested town. Not everyone can pin their hopes and dreams on basketball alone.

I listened to the audiobook, read by Ben Lukens. Lukens is a great choice for the material, and the perfect choice for Finley. Lukens also keeps up with Russ/Boy21’s changing moods – alternately using an alien from outer space voice at times for Boy21, and a vulnerable/manic/friendly voice for Russ. There are a lot of great side characters in this book of varying age and Lukens makes each voice distinctive. This 5-hour audiobook just flew by.

Check out an audiobook sample of Boy21:

Boy21 is another successful Matthew Quick outing- I think his books work for adults as well as teens. Hand this one to reluctant readers too. The characters are complex, the setting is vivid, and the story hooks you right from the beginning. It even got me tearing up a little! The story takes a little turn that I didn’t expect at all, and the ending is satisfying yet bittersweet.

Review: The DUFF by Kody Keplinger
#YADiversityBookClub: Under a Painted Sky by Stacey Lee
Review and Giveaway: Fury by Elizabeth Miles
Waiting On The Geography of You and Me by Jennifer E. Smith
Top Ten Favorite YA Contemporary Reads of 2013