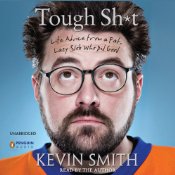 I remember watching Kevin Smith’s Clerks and Chasing Amy back in the day – I was big into slacker movies in the 90s. I think those are the only two of Smith’s movies I’ve seen – now I’m more of a romantic comedy kind of girl. Still, I remember the two films fondly; they introduced me to Smith’s humor, and in turn led the way to me listening to this audiobook. Now I know Kevin Smith more as a personality, as well as an annual public speaker at Hall H at Comic-Con. Based on all this I knew I was sure to be entertained and amused with Tough Sh*t.

In Tough Sh*t: Life Advice from a Fat, Lazy Slob Who Did Good, Smith talks about his movie career and his influences from George Carlin to Wayne Gretzky to John Hughes. He dishes on which actors impressed him and which actors pissed him off as he takes you behind the scenes of his movies. Smith also gets the infamous “too fat to fly on Southwest” incident off his chest.  Smith acknowledges his family by including a loving recognition of his wife Jen and compares his first date with Jen to Lloyd Dobler asking out Diane Court. Behind it all is some good career advice to get paid doing what you love to do.

Kevin Smith’s story is inspirational – he fell in love with film and followed his dream to be a filmmaker. From his first visit to New York’s Angelika theatre he knew he wanted to follow in the footsteps of Slacker’s Richard Linklater and make films. In fact I learned in this audiobook that Smith made his mark on cinema by creating the bromance film genre.  Interesting, right?

The part of me that loves Hollywood gossip ate up Smith’s celebrity stories, from Bruce Willis’ on set bad behavior to his falling out with mentor Harvey Weinstein. Smith also gives a fascinating look at filmmaking when he decides to self distribute his Tarantino-esque film Red State. He also gets some jabs in to the movie critics who love to hate him.

Who better than Kevin Smith to narrate his story? It’s his life and his stories and you can hear the passion and enthusiasm in his voice. His story is very personal, and like his films potty-mouthed at times, and I can’t imagine anyone else narrating the book. Smith is a professional podcaster so is obviously very comfortable behind the mic, and the six hours I listened to this audiobook flew by. His sharp humor, intelligence and knowledge of pop culture made for an entertaining listening experience.

This book is for Kevin Smith fans, those who love movies and pop culture, and those looking for some creative inspiration. If you have six hours to spare and are not easily offended, check out this audiobook.

Check out some other opinions of Tough Sh*t the audiobook:

Owl Tell You About It