I’m more adventurous in my audiobook choices than books in print, and I love listening to a great memoir. Recently I listened to the sports memoir Long Shot about baseball player Mike Piazza, someone who became very successful in his field by working hard and never giving up. This is obviously not my usual YA fare, but Piazza’s teen years are covered in the book, and his story is an inspirational read for aspiring athletes and fans of the sport. 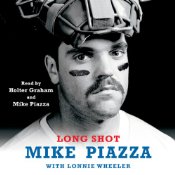 The lowdown: 3.5 / 5 Stars. Worth a listen, especially for baseball fans

I’ve never read or listened to a sports bio before, but I grew up a Dodger’s fan and Mike Piazza was one of my favorite players back in the day. He started out as a 62nd round draft choice and courtesy pick (his father is great friends with then-manager Tommy Lasorda) but he later became rookie of the year, and a 12-time All-Star Catcher, breaking numerous records. Piazza had a famous falling out with the team, though and was traded after six seasons. He settled in with the Mets and went on to extend his successful career.

Piazza gives an inside view of the events, and where things went wrong with the Dodgers. He lays it all out there, as well as setting the record straight about rumors of performance enhancing drug use, feuds with other players, and about his sexual orientation.

It’s interesting hearing the behind the scenes info about the sport of baseball, the politics at play, and player/manager/fan interaction. Piazza always felt like the underdog, but he kept his head down and worked hard to achieve his dreams. His dad is his biggest supporter, building him his own batting cage at home to practice, and helping with contract negotiations. Piazza is straightforward about his career and doesn’t seem to hold anything back even when he isn’t shown in the best light.

The fall-out with the Dodgers is especially sad. LA fans will be uncomfortable when Piazza places some of the blame on beloved sportscaster Vin Scully, who he claims turned the fans against him during contract negotiations.

Mike Piazza was a NY Met when the events of Sept. 11th took place and talks about returning to play at Shea Stadium for the first game after the attack. It’s really moving hearing about the huge crowds that came out to see the Mets play and Piazza obviously was hit hard by the event.

Regarding the audiobook, Mike Piazza reads the prologue, first chapter, and epilogue, with Holter Graham (The Art of Fielding narrator) reading the lion’s share of the book. I generally prefer authors to narrate their own memoirs, but I have no complaints about Graham’s narration. In fact, at first I didn’t even notice when the narration shifted from Piazza to Graham, so Graham does capture Piazza’s tone and is obviously comfortable with the baseball speak. Graham uses different voices and accents and speaks clearly and at a good pace. I’d listen to more books narrated by Holter Graham. Mike Piazza reads very little of the book and is obviously not a professional narrator but he speaks with passion and sincerity and from the heart. I’m glad he narrated at least a portion of the book, to share his thanks for his family, and to talk about his Hall of Fame wishes.

One thing that confused me a little in the audiobook is when different people in Piazza’s life shared their point of view. It wasn’t always clear who was speaking. This is probably easier to figure out in the print version, but I got used to the brief snippets from other players and family members and eventually the transition clicked.

Long Shot is a good read for baseball fans looking for the inside scoop. Fans of the game, Piazza, the Mets, or the Dodgers should find this bio entertaining. I’d recommend listening to the audiobook to help bring the baseball action to life.