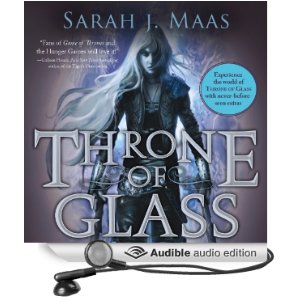 Throne of Glass is a re-read for me, in preparation for the newly released sequel, Crown of Midnight. I first read this book over a year ago (review and author q&a) and definitely needed a refresher! Since this series is new to audiobook format, it’s a great opportunity to get re-acquainted before jumping into the sequel. Listening to the audiobook reignited my passion for this series and let me see the story through fresh eyes/ears.

The set up is that Celaena Sardothien is an 18-year-old imprisoned assassin who must compete to become the King’s champion (henchman) to earn her freedom. It’s a Cinderella love story with a Hunger Games twist, filled with magic, competition, friendship, and romance.

Celaena is brought in by Prince Dorian to compete anonymously against thieves and thugs for the coveted role of Champion. Since she is known as “Lady Lillian” at the Glass Palace, her rivals don’t have any idea she is an infamous assassin. Meanwhile she’s training hard to win the “prize” and her eventual freedom. One little wrinkle is that champions are being murdered left and right in quite a gruesome way – who is behind these crimes and will Celaena be next?

Celaena is kind of an enigma. On the one hand, she wants to show up her fellow challengers in the competition, and on the other, she wants to read, play dress up and go to the ball. And like Celaena, I had a hard time making my mind up between her two “suitors,” Prince Dorian, and her trainer/companion Captain Chaol Westfall.

One of my favorite characters from the first reading was Princess Nehemia, a feisty visitor to the palace, and friend to Celaena. She’s such a strong, interesting character that keeps you guessing if she is on the up and up.

The love triangle of sorts is as much a part of the story as the competition. Chaol is the strong and loyal type, while Dorian is endearing and charming in his own way. I’m definitely interested to see how the triangle evolves in the sequel.

As someone who is a (very) casual reader of high fantasy I appreciated that the story is accessible and fun, with great characters and a fast-moving plot. Even though this was my second read-through I was highly entertained. Maas has a lovely way with words, and sets up some interesting scenarios in the first installment.

I listened to the audiobook, performed by Elizabeth Evans. Evans has read dozens of audiobooks but this was my first experience with her. One thing off the bat that’s awesome about the audio is that those tricky names and places are pronounced correctly for you. No more worrying about your pronunciation of Chaol, Celaena, and Eyllwe. (There’s also a handy pronunciation guide!) Evans captures the essence of Celaena and makes her sound alternately tough and sweet. Evans makes all the characters sound unique, from the arrogant King, to the villainous Cain and Kaltain, to the stalwart Chaol. Evans sounds age-appropriate for the story and reads with a clear voice and brisk pace. And sneaky Audible ends the book with a healthy sample of the second book, Crown of Midnight! So, of course I spent a credit on that book because the sample reeled me in. This is a series I’ll continue in audio format, and it’s a good “first audio” pick for new listeners or re-readers alike.

Mailbox Monday #71
Deals for your Kindle (2)
Live Through This by Mindi Scott Book Review
Waiting On: The Distance Between Us by Kasie West
Lola and the Boy Next Door by Stephanie Perkins