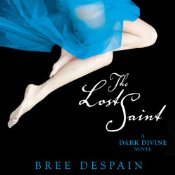 The Lost Saint is book two in The Dark Divine trilogy. Hard to believe it’s been two years since I read The Dark Divine. I read that book at a time when I was reading a lot romantic paranormal type books, and I gave it high marks. Though it’s been a while since I’ve read the first book, I quickly got caught up to speed with the sequel. This book is more action packed then the first book and gives some additional background on the wolf mythology, as it continues to mix religion into the story. It’s a better than average middle book that keeps the story interesting with romance, action, and plot twists galore.

In this installment Grace is trying to balance the wolf side of her nature and to use it for good. She is also focused on finding her brother Jude. Daniel is going through some inner turmoil, and that is putting a bridge between him and Grace. It is not surprising to see the lovebirds struggling since that is typical for a middle book, and a new character is introduced to cause more of a rift between them. When Grace meets Talbot, he says all the right things and quickly gains her trust by offering to help with wolf training when her boyfriend is unavailable.  I didn’t mind the potential love triangle, and Talbot added interest by coaxing out a stronger side of Grace.

Grace is tested when the dark wolf side of her emerges, and she has to decide where her allegiance lies. She is in the middle of a growing conflict, and being pulled in different directions. She has grown a lot as a character, but still has more to learn, and her communication issues with Daniel are a little trying at times.

The action is what sets this installment apart. There is danger lurking around every corner, and new reveals about the wolf mythology and the threats that face the familiar characters.

Eileen Stevens narrates the audiobook, and it was my first time hearing her narration, though she is an audio veteran.  Ms. Stevens reads at a nice pace, and does not sound too old or too young for the main character. She gives the reading her all, giving different voices to all the different characters in the book, both male and female. Though I was most impressed with her female voices, she delivers the male voices with conviction as well.  The reader really acts out the parts and makes listening to the audio version worth it. Regarding the production quality, the sound is clean and clear. There is a snippet of mysterious music at the beginning and end of each disc, along with the announcement of the disc number. I only mention this because I haven’t come across that too much in audiobooks, but it does help as a reminder of where you are in the book.  I would listen to this narrator again.

I was pleased with the conclusion, and where the story left off, though it is a cliffhanger. I’m eager to read the last book in the trilogy, The Savage Grace, due out March 13. Fans of The Dark Divine should be pleased with the direction in the series, and readers of Shiver and Nightshade should give this series a try.

4 thoughts on “The Lost Saint by Bree Despain: Audiobook Review”