Mailbox Monday is a weekly event where we share our latest book arrivals. Join in to share your book loot and discover some new book blogs. Drop by Book Obsessed to link up for July!

Hi guys! I just got back from Comic-Con and had a blast but I am so exhausted! I was averaging 3 or 4 hours of sleep a night so I wasn’t able to post anything during my travels, but to get back into the swing of things I’ll share some of the books I picked up this week.

I really failed at SDCC book panels this year, and couldn’t even get into the Simon & Schuster book panel. I was beginning to think I lost my lucky Comic-Con book mojo and I was getting bummed about missing all the cool author events. But- this trip turned into more of a Movie and TV intensive Con and I spent lots of time in Hall H seeing the big movie panels, and that’s OK! I still had a total blast. And the trip ended on a bookish high note when I got to attend the What’s Hot in YA book panel and signing on Sunday. 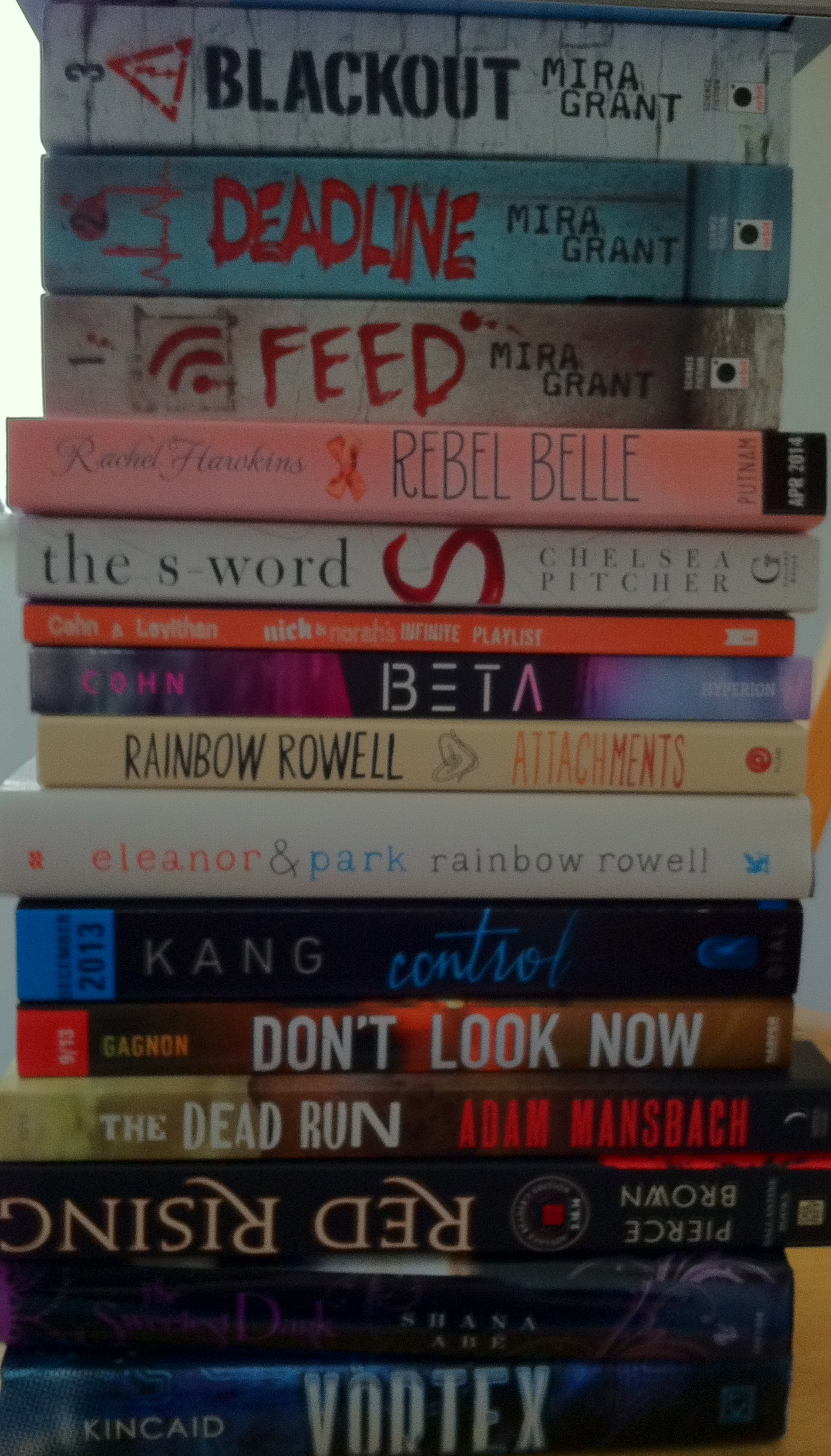 The Newsflesh trilogy by Mira Grant – I just happened to see her signing Sunday after her Science Fiction and the Future panel. She was only signing for 15 minutes before she had to dash off to another event but I got my books signed.

Rebel Belle by Rachel Hawkins – This is the first book in a new trilogy that is due out in April. It looks so fun, and Hawkins was hilarious on the panel.

The S-Word by Chelsea Pitcher – I like tough issue books and I’m eager to check this one out. Super sweet author!

Nick & Norah’s Infinite Playlist and Beta by Rachel Cohn – So cool to finally meet Rachel Cohn! I told her I’m planning a NYC trip and how I want to visit some of the places mentioned in Dash & Lily’s Book of Dares. Also, the paperback cover of Beta is very pretty.

Attachments and Eleanor & Park by Rainbow Rowell – Meeting Rowell was high on my list of priorities for the Con, and I did get to have a great conversation with her. And she told me that the Fangirl audiobook is going to have the same narrator as Eleanor & Park. Can’t wait!

And more books I picked up on Preview Night:

Control by Lydia Kang – From the ever-popular Penguin booth. Actually I never revisited the Penguin booth for the rest of my time at the Con because it was just so, so busy in the exhibit hall. Control is described as “a spiraling, intense, romantic read set in 2150”, and is about “the human genetic “mistakes” that society wants to forget, and the way that outcasts can turn out to be heroes.” Look for Control Dec. 26th.

Don’t Look Now by Michelle Gagnon – Received a signed ARC for spinning the wheel at the Harper Collins booth. This is the sequel to Don’t Turn Around and is due out Aug. 27th.

The Dead Run by Adam Mansbach – Received an ARC at the Harper Collins booth with a paid purchase. The book comes out Sept. 24th and is described as “an unnerving supernatural thriller, set in the netherworld of the US/Mexican borderland, from the #1 New York Times bestselling author of Go the F**ck to Sleep and the acclaimed Rage Is Back.”

Red Rising by Pierce Brown – Received an ARC at the Del Rey booth. This book comes out Feb. 18th of next year and actually sounds very cool. It is the first book of a sci-fi trilogy about class conflict and revolution. It sounds like it could be a pretty big deal.

The Sweetest Dark by Shana Abe – Received a finished copy from Bantam Books. It’s a YA paranormal/historical fiction that came out in April of this year.

Vortex by S.J. Kincaid – Signed copy purchased at the Harper Collins booth. I wasn’t responding to the audiobook of this one so I’m going to try to read it in print instead.

Look for a write-up of all my Comic-Con experiences throughout the week (when I’m less bleary eyed). And next week I’ll catch up on the review books in my mailbox.

Let me know what you’re reading or listening to in the comments. Have a good week!